US scientists have used a DNA walker to synthesise an organic molecule in a series of steps, without intervention, for the first time.

The walker, devised by David Liu and Yu He from Harvard University in Cambridge, has also achieved the highest known yield of any three-step DNA-templated small molecule synthesis to date.1 ’Using the unique features of these walkers, we can direct organic synthesis in ways that are more sophisticated than is possible using simple Watson-Crick base pairing,’ Liu told Chemistry World.

Liu and He based their walker on a design originally described by Chengde Mao from Purdue University, US.2 It starts with a single DNA strand comprising a ’track’. The walker and three ’stations’, made from specific DNA sequences, organise themselves along the track using the normal pairing of DNA bases. ’The walker will move unidirectionally along the track,’ Liu says. ’We attached chemical reactants to the walker and each station on the track. As the DNA walker moves from station to station, a programmed series of chemical reactions takes place.’ 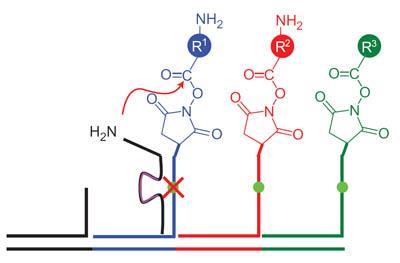 The walking strand of DNA moves to each station (blue, red and green) in turn and reacts with the attached reagent

In this way, the Harvard team was able to perform three acylation reactions, progressively adding two unprotected unnatural amino acids and a carboxylic acid to a starting amine group on the walker. Whereas conventional multi-step syntheses might require several reaction vessels, this combination of DNA components could do the whole sequence in a single pot. The walker device synthesised the complete three-step product in approximately 45 percent overall yield, with byproducts that missed out one of the three reactions observed in 10-25 percent yields.

According to Liu, the specific molecule that they synthesised was not particularly important. ’The goal was not to synthesise a particular target molecule, but rather to develop and validate a new approach to doing multi-step organic synthesis in which the reactions take place sequentially and autonomously in one solution.’ Liu also emphasised that he doesn’t intend the approach to be used to make large amounts of individual chemicals. ’This kind of technology might be suitable for certain types of screening and selection approaches to rapidly evaluate organic compounds for interesting biological properties,’ he explained.

Mao calls the adaptation of his technology ’very important’ and ’a big jump towards application for DNA walkers’. He adds that the work expands the application scope for DNA-based nanodevices, and further develops DNA-directed chemical reactions: ’Programmed multiple reaction sequences without human intervention is a great achievement.’