DNA walker strides towards the light

DNA molecules are now able to enjoy a stroll in the sunshine, thanks to US and Chinese chemists who have developed the first light-powered DNA walker.

Up until now, synthetic DNA machines have mainly been powered by chemical reactions, but light offers the potential for a much greater degree of control, allowing these machines to be stopped and started on command. ’For chemists, precise control over nano-sized mechanical movement is still quite difficult and we believe that light power, with high temporal-spatial resolution and the ability for remote control, provides a future for this fast-developing area,’ explains lead researcher Weihong Tan at the University of Florida, US.

The stumbling block has been finding a mechanism to convert light into movement. This is what Tan and his team have now come up with and it’s all based on the photolysis of disulfide bonds. 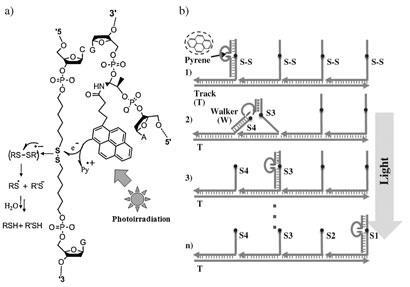 The walker has only managed to travel 21nm so far

The DNA walker begins its stroll by binding to the first pole: the long leg of the walker binding with the long section of the pole and the short leg binding with the short section. When light is shone on the DNA walker, its pyrene molecule cleaves the disulfide bond in the pole, causing the short section to detach and float away. The short leg of the walker then searches for another site to bind with, alighting on the next pole and pulling the long leg along with it.

This process is then repeated as the DNA walker moves from pole to pole along the track, with the DNA walker always obliged to move forwards because it can only bind with an intact pole. Other than the direction, the scientists found that they had a great deal of control over the walker’s movement. They could stop it at any pole by simply switching off the light source, while increasing the light intensity caused the walker to speed up.

So far, the walker has only moved between four poles, covering a distance of 21nm, but Tan says that it should be able to travel much further. He and his team are now looking to make even faster walkers that can also change direction.

’In the future, we hope to demonstrate the real applications of these walkers, such as transporting cargo, synthesising novel nanomaterials and controlling biological processes,’ Tan says.