But the technique could also have unexpected benefits for the burgeoning field of metagenomics - the systematic investigation, classification, and manipulation of the jumble of genetic material found in environmental samples. 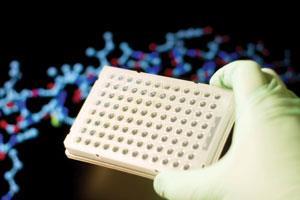 Current technology has trouble interpreting small amounts of mixed DNA samples, especially when the material is poor quality. Martin Bill, a science manager in FSS’s R&D department, says, ’DNAboost could increase the effectiveness of DNA profiling in crime-scene detection by over 15 per cent.’ The FSS hope that thousands of ’cold’ cases - some from over 30 years ago - could be solved with DNAboost-resolved samples.

Thousands of such sequences, invariably from the non-coding ’junk’ part of the DNA sequence, have been mapped at different locations on almost every chromosome of the human genome. Unique genetic profiles can be built up by counting how many repeats of a specific STR sequence there are at particular points (the FSS use 11) in the genome.

DNA profiling relies on the polymerase chain reaction (PCR) to amplify tiny traces of DNA found at a crime scene into enough material for analysis. Electrophoresis then separates the amplified STRs, which are visualised and identified using sensitive fluorescent dyes. This means that only one nanogram of genetic material is required to get a DNA profile, which can be matched with those stored in data banks.

But crime-scene samples which have come from more than one source, or have become contaminated or degraded over time, have until now proved uninterpretable by DNA profiling.

Enter the FSS’s new DNAboost software. It can unravel these complex mixtures, although the FSS is saying little about how because the technology is still awaiting patent protection. ’We have developed a new data storage and coding algorithm that allows suspects to be identified faster and more accurately than by comparing complex samples to every DNA profile in a database,’ says Bill. A little vague, perhaps, but DNAboost has got American and Interpol forensic scientists interested.

And the technique could have other applications apart from crime-busting. Rolf Apweiler of the European Bioinformatics Institute in Cambridge, UK, reckons that DNAboost could be useful for analysing the tremendously complex mixtures of genetic material found in soil or ocean samples.

Metagenomics research like this is helping to discover previously unknown microbes in the environment that can be ’mined’ for new therapeutic molecules.

’All these species are more genetically distinct from each other compared to the differences between human beings,’ says Apweiler. ’So identifying them using DNAboost should be trivial.’