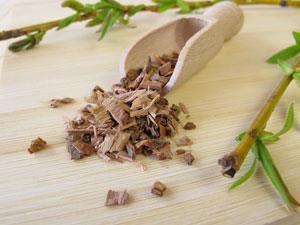 Many drugs, such as aspirin, are derived from plants

In their search for new drugs, pharmaceutical companies should pay more attention to traditional medicine, say UK researchers. This follows their discovery that genetically-similar plants have traditionally been used to treat the same conditions in widely separated parts of the world.

Traditionally-used medicinal plants have often proved a fertile source for new drugs. The modern pharmaceutical industry was kicked off in the 19th century by the discovery that acetylsalicylic acid (aspirin) was the active component in willow, used for thousands of year to treat pain and inflammation. Since then, many other important drugs have been derived from medicinal plants, such as the antimalarial drug artemisinin, which comes from sweet wormwood, a herb used in traditional Chinese medicine to treat numerous illnesses, including fever.

The pharmaceutical industry still regularly utilises plants as a source of new drug compounds, but it has mainly turned its attention away from traditional medicine towards high-throughput screening as a way to discover drug candidates. Part of the problem with looking for new drugs in traditional medicines is that so many plants are used around the world. It is estimated that up to 53,000 different species are used, which makes it difficult to know where to begin. As a result, only a very small number of these species have been screened for biological activity.

What is needed is a way to identify the most promising medicinal plants and this is what a team led by Julie Hawkins at the University of Reading has created. ‘Our results can be utilised to point bioprospectors towards which plants should be prioritised in drug development schemes,’ explains team member Haris Saslis-Lagoudakis, now at the Royal Botanic Gardens in Kew.

Using techniques initially developed for ecology, the researchers constructed molecular phylogenetic trees reflecting the genetic relationships between the majority of the different genera of plants found in three widely-separated regions of the world: Nepal, New Zealand and the Cape of South Africa. When they highlighted the genera used for traditional medicine in each region on these trees, they found that the genera tended to congregate in certain genetic ‘hotspots’. This was especially true if they highlighted the genera used to treat each of 13 different conditions, including cardiovascular and neurological conditions.

Next, they merged the molecular phylogenetic trees for each of the three regions into one, finding that many of the hotspots tended to overlap. Because the regions were too widely separated to have much cultural interaction, the medicinal properties of these genetically-similar plants must have been independently discovered in each region, implying that they do make effective treatments and should possess useful bioactive compounds.

‘As we show, certain closely related plant groups are used to treat the same conditions in different regions of the world and these plant groups are rich in species with proven medicinal properties,’ Saslis-Lagoudakis tells Chemistry World. ‘In our study, we provide extensive information of which of the plants included in the work should be prioritised to find leads and cures for a series of medical conditions.’ Saslis-Lagoudakis hopes this work will now be built on through the creation of more detailed phylogenetic trees down to the level of plant species, as well as for other regions of the world.

Although acknowledging that this is interesting research, David Newman, head of the Natural Products Branch at the US National Cancer Institute’s Frederick National Laboratory for Cancer Research, urges caution. ‘One of my areas of concern is that it is well documented in traditional Chinese medicine and other similar compilations of medicinal plants, that the conditions of growth, collection and processing must be considered when comparing medicinal attributes,’ he says. ‘The same plant when grown under differing conditions often does not produce the “agents of interest” when compared to the original source.’