Drinking water from sunlight and seawater

A device that can ’push’ the salt out of seawater has been developed by US researchers. Efficient enough to be powered by sunlight, the process could lead to small-scale or portable desalination devices that could provide vital drinking water in disaster zones or areas of severe drought.

Using modern semi-permeable membranes to convert seawater into fresh water is increasingly popular as a solution to global water shortages. Two common techniques are reverse osmosis, where seawater is forced through a sieve-like membrane to filter out salt - and electrodialysis, which uses electrical current to pull salt ions through a membrane.

But in both cases, organic matter and salt accumulate on the membranes and clog up the system. Now, an alternative technique has been developed, which overcomes this problem but remains highly energy-efficient.

’We are using a phenomenon called ion concentration polarisation to "push" the salt out of seawater,’ says Jongyoon Han, who led the research at Massachusetts Institute of Technology. ’When a voltage is applied across a small membrane made from an ion-selective material such as Nafion, something unusual happens. On one side of the membrane, charged particles are repelled - and on the other side, they are collected.’ 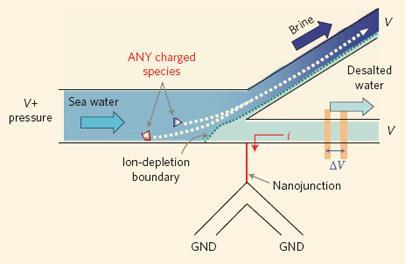 Salt and other charged particles are diverted off, leaving desalted water to flow down a separate channel

Han’s team developed a microchip-sized device that funnels a stream of water down to a fork and splits into two channels. The entrance to one channel is covered with a charged Nafion membrane, which shields the water flowing down it and pushes any salt down the other channel. Crucially, the shield also repels other charged particles, both positive and negative, which includes most organic matter and microorganisms, such as bacteria, viruses and other contaminants.

But to function effectively the process requires very small water channels and these can only produce tiny amounts of water on their own. ’Our future direction is similar to how the semiconductor industry makes microchips,’ Han explains. ’We can envision thousands of water channels on a single chip - the goal is to make systems that can produce around a litre of purified water over ten minutes.’

Although Han admits this is a relatively small amount, it may be possible to run the device continually for a long time using solar power, which could be extremely valuable in areas of critical water shortage.

Adel Sharif, an expert in water treatment and desalination at the University of Surrey, UK, is interested by the new process, but thinks that more work is needed. ’There are some problems to overcome,’ he told Chemistry World. ’Gold and titanium electrodes are currently used, so finding cheaper or alternative materials is needed to scale the technology up into devices. Also, some non-charged particles may cause fouling of the membrane - so a system of pre-treatment may be required.’