US and Singaporean scientists have discovered how a promising anti-tuberculosis drug, PA-824, triggers an explosive chain of events inside its target bacterial cells. They say the finding will help them optimise the drug to combat latent TB - a non-replicating form of the bacterium that lies dormant in around a third of the population.

PA-824, a bicyclic nitroimidazole, belongs to a class of drugs active against bacteria growing in conditions of low oxygen, including Mycobacterium tuberculosis, in latent TB infections. Its potential for treating TB was recognised in experiments in animals in 2000 and it is currently undergoing phase II clinical trials, but its mode of action in anaerobic bacteria was unclear until now.

Study co-author Helena Boshoff, based at the National Institute of Allergy and Infectious Diseases in Maryland, says PA-824 works like a missile, being metabolised to form reactive nitrogen intermediates, including nitric oxide, that explode latent cells from the inside.

But PA-824 needs a detonator, in the form of a reductase enzyme, Ddn, which is produced by the bacterium. By replicating the reactions of the drug in the lab, the team show that Ddn - when paired with a cofactor responsible for donating two electrons - reduces PA-824, initiating further reactions along three different metabolic pathways. 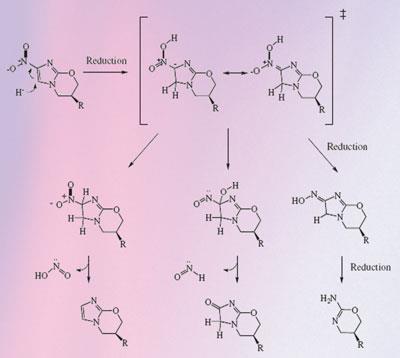 The bicyclic nitroimidazole, PA-824, is reduced by the Ddn enzyme to form intermediates that release reactive nitrogen species inside TB bacteria

One of the pathways, which finally generates a compound called des-nitroimidazole, produces a lot of reactive nitrogen intermediates as by-products. ’So we want to push the pathway to towards des-nitroimidazole because that really releases a lot of these intermediates,’ says Boshoff. ’Now we understand the mechanism we can optimise for drugs that will have better activity against anaerobic bacteria.’

PA-824 was not initially designed to target latent TB bacteria and is also active against replicating cells - cells growing under aerobic conditions. But, notes Boshoff, anaerobic bacteria are more sensitive to the intermediates the drug produces because their metabolism is not as robust. She adds that PA-824 might also be useful for targeting other pathogens residing under conditions of low oxygen, although at present her team are focused solely on drug development for TB.

Robert Wilkinson, a TB specialist at the University of Cape Town in South Africa, says the findings are important and raise hopes for new drugs that work by tricking bacteria into signing their own death warrants. ’But what is most interesting is that the cofactor for Ddn is essential and appears restricted to a few genera of micro-organisms. This makes cross-activation by mammalian enzymes unlikely,’ says Wilkinson.