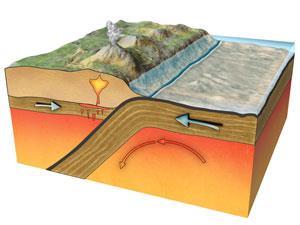 Subduction of the Earth’s crust – and modern-day plate tectonics – may have begun as early as the Hadean Eon, 4.4 billion years ago, according to a new study led by researchers from Australia. Using geochemical stratigraphy, the researchers found similarities between modern-day subduction zones near Japan and early-Earth deposits from Canada.

The exact nature of the early Earth’s geological processes – and the origin of conventional plate tectonics – remains a fundamental question for the earth sciences. Studies in this field are hindered by the rareness of rocks from this time period. It is perhaps not surprising, therefore, to find competing theories abound. Some scientists propose that modern-style plate tectonics began quite early on Earth – at least 3.8 billion years ago – while others push the date of the first subduction back to around 3 billion years ago.

The latest work compares the Canadian Nuvvuagittuq greenstone belt, believed to be between 4.4 and 3.8 billion years old, with rocks from the present-day Izu-Bonin-Mariana (IBM) plate boundary off the coast of Japan. Rather than comparing individual geochemical signals, however, the researchers matched the trace element patterns of a recognisable stratigraphic sequence of rocks, representing a transition from an initially-fracturing ocean plate through to fluid release, melting and ultimately subduction.

‘What is particularly interesting is that the [IBM boundary] stratigraphy is also observed in the Nuvvuagittuq sequence, one of the oldest, if not the oldest rock record on the planet,’ says lead author Simon Turner, a geochemist from Macquarie University. ‘This similarity suggests that subduction, a major process in the modern Earth, may have operated in a similar fashion in the Hadean.’

This places the origins of plate tectonics in the aftermath of the impact that formed the moon. In addition, the subduction zones formed at this time may have provided a suitable environment for the origin of life, with serpentization processes, the low-temperature alteration of rocks through hydration, providing the necessary simple organic molecules and chemical energy.

‘This is an excellent and very timely study, providing a resolution for a longstanding question in Archean and Hadean geology,’ says Ali Polat, a geochemist at the University of Windsor, Canada, who was not involved in this study. Polat commends the work for its basis in field observations and high-precision trace element data. This is a strength he feels has been missing from many recent studies in this area, which have relied instead on numerical simulation – the results of which are strongly dependent on the boundary conditions set by their authors.

Caution has been expressed by others, however, over the assumption that the geochemical signals identified in the Nuvvuagittuq rocks could not have an alternative origin. ‘It is important to point out that initiation of subduction is only one way in which this stratigraphy can be explained,’ says Kent Condie, a geochemist at the New Mexico Institute of Mining and Technology, US. He cites a 2006 study proposing a stagnant lid based tectonic regime which could produce a similar sequence of rocks. ‘This continues to be a topic of heated debate,’ Condie adds, ‘yet Turner et al completely ignore all but their favoured model of subduction.’