Sensors based on single-walled carbon nanotube (SWNTs) could be ’reset’ at the simple flick of a switch, say researchers in the US.

The team found that organic molecules bound to the nanotube surface are shaken off when an electric current is passed through the material, resetting the sensor ready for further use.

SWNTs can be used in very small, highly sensitive chemical sensors for a variety of gases and other chemicals. The SWNTs, attached to a silicon substrate, absorb chemicals onto their surface, however many chemicals are irreversibly absorbed resulting in lengthy processes before the sensor can be reused.

Richard Masel and colleagues at the University of Illinois, have got round this problem. Their technique - current-stimulated desorption (CSD) - passes a strong electric current through the SWNTs. As electrons jump across defects built into the nanotubes, they collide with molecules on the surface. ’When they hit an absorbed molecule, they transfer excess energy to it, and it flies off the surface,’ Masel tells Chemistry World. 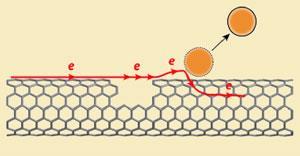 Electrons are accelerated across a nanotube defect and collide with molecules on the nanotube surface, shaking them off

This technique forces a variety of chemicals to desorb from the nanotube surface, without a significant heat increase or degradation of the sensor. The team tested ten similar sensor systems and found that alcohols, aromatics, amines and phosphonates all released their grip in this way, allowing the sensors to be reset quickly.

CSD has advantages over known methods for desorbing molecules from SWNTs, such as photodesorption, where an external ultraviolet (UV) light source is applied to the surface. Desorption using UV light takes longer as the number of electrons created by shining light onto a surface is relatively small, leading to a slower regeneration of the sensor. ’CSD is a faster regeneration of the sensor as the electrons are already in the nanotube and you don’t need anything extra, all you need to do is turn up the voltage,’ says Masel.

’This is one of the few papers that reports a genuinely practical application of carbon nanotubes in which they are used to provide significant performance advantages over devices fabricated from other, more conventional materials,’ says Angus Kirkland, an expert in carbon nanotube-based materials at University of Oxford in the UK. ’It may lead to low cost, highly specific sensors for harmful organic materials with obvious implications in security, healthcare and environmental monitoring,’ he adds.