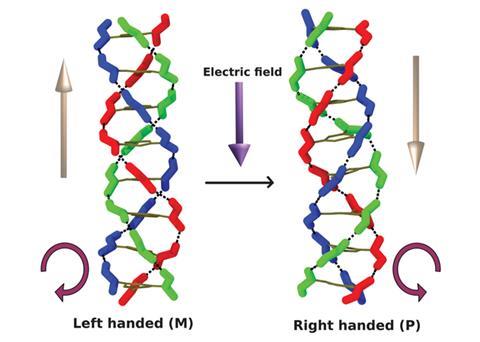 Electric fields can switch both the net dipole moment and the helical handedness of helical supramolecular structures, according to a theoretical study by scientists in India.

Sundaram Balasubramanian and his co-workers at the Jawaharlal Nehru Centre for Advanced Scientific Research (JNCASR) have used computer simulations to test the effect of an electric field on these stacks, and were surprised to discover that not only could they control the overall dipole of the structure, but also its chirality, or handedness.

‘These supramolecular stacks could act as chiral templates for use in enantioseparation,’ says Balasubramanian. ‘Use of an electric field to switch the supramolecular handedness will ensure that a single material can be used for separating both enantiomers, a significant improvement over the present methods. Another possibility is to use these stacks as nuclei for chiral amplification [enrichment of enantiomeric stacks] from a fresh feed of achiral molecules.’

Daan Frenkel, an expert in self-assembled structures at the University of Cambridge, UK, also points out the applications of structures like these with regards to polarised light. ‘The chirality, and hence the optical rotatory power, can be switched,’ he says. ‘This is an exciting prediction that is likely to have wider implications.’

The team has already begun on the next step, which is experimentally verifying the switching phenomenon. They would also like to study the effect of an external electric field during the self-assembly process itself.