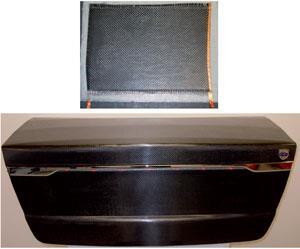 A new composite material that can simultaneously withstand mechanical loads and store electrical energy has been created by scientists in the UK and Belgium. Based on activated carbon fibres, the structural supercapacitor has been formed into a full-size car boot lid that can power LEDs.

The composite can be seen as an alternative to assembling two separate components so could benefit electric vehicles by creating bodywork that also stores power, saving both space and weight. ‘Multifunctional structural energy materials hold great promise in enabling more energy efficient and environmentally-friendly technologies, as they will make a considerable difference in terms of how we store and deliver energy in the future,’ says Guihua Yu, an energy storage specialist at the University of Texas in Austin, US.

Recognising that carbon-based materials are the foundation of many structural composites and electrochemical devices, Milo Shaffer of Imperial College London, UK, set out to create a material that incorporated the strength and stiffness of structural carbon fibres and ionic conductivity of activated carbon. A key part of the study was increasing the effective surface area of structural carbon fibres for use as supercapacitor electrodes. Formation of highly porous carbon aerogel around the fibres increased their surface area and specific capacitance by three orders of magnitude and also provided additional benefits to the mechanical properties.

Shaffer admits that the main challenge of the study came in the form of the multifunctional electrolyte, which must combine mechanical properties with ionic conductivity – two intrinsically inverse concepts. A balance in performance was achieved by producing a bicontinuous structure comprising an epoxy resin for its mechanical properties and an ionic liquid for ionic conduction.

The laminated nature of composites facilitates many energy storage devices such as lithium ion batteries, etc so ‘Why a supercapacitor?’ ‘In batteries there are a lot of problems with volume expansion and so it’s quite hard to make these devices structural,’ Shaffer explains, ‘which is why we found supercapacitors interesting; you can have a useful energy function but don’t necessarily have any volume change.’

Something that must be mentioned is the power density of the material, which is lower than current state-of-the-art supercapacitors. However, Shaffer is aware of the current shortcomings of the material and the development of such a system can be seen as no small feat.  ‘It is a critical step toward the right direction; various possible ways were tried to develop an optimised, processable device system,’ explains Chuizhou Meng, a supercapacitor expert at Purdue University in the US. ‘Many studies in the future will be guided by this work following the research strategy of elaborately finding a balance between mechanical and electrochemical properties.’