A device that harvests solar and movement energy could be incorporated in clothes, bags or flags

An energy scavenger device that can convert both solar energy and movement energy into electricity to power portable electronics has been made by scientists from Korea and the US. The device could find its way into your home in the future as it’s flexible enough to be attached to clothes, bags, curtains or flags, say the researchers.

Sang-Woo Kim from Sungkyunkwan University in Suwon and colleagues made the device from piezoelectric zinc oxide and an organic solar cell so that electrical energy can be provided either by sunlight or wind or body movement, depending on which source is available at the time.

It’s been believed that solar energy is sufficient for powering portable electronics because it has a high efficiency, but many mobile electronics are operated indoors in areas with dim lighting. In such cases, the power that can be harvested drops by two to three orders of magnitude, say the researchers, and harvesting energy from other sources becomes viable. 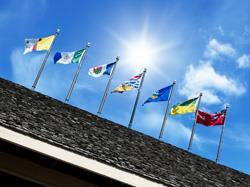 So far, attempts to make multi-type energy devices have been plagued by cross-talk problems, in which energy transfer between adjacent conductors occurs, causing a drop in efficiency. Kim’s device gets around this problem. The team made a cathode from an indium tin oxide coated polymer. They coated this with a layer of zinc oxide nanorods - the parts that are activated by movement. Another polymer layer - the part that’s activated by light - was added between the nanorods. The rods have a dual role because they also transport electrons generated by the solar cell.

’Materials chemistry can provide integrated solutions to energy harvesting and regeneration via new developments, especially in the area of smart and multifunctional systems. This work presents one such development via the fusion of photovoltaic and piezoelectric hybrid materials,’ says Elias Siores, an expert in piezoelectric materials from the University of Bolton, UK. ’Such systems will pave the way forward in enhancing effectiveness and efficiency in energy conversion systems.’