New electrochromic thin films that show promising potential for use in high performance displays have been developed by Chinese researchers.

New electrochromic thin films that show promising potential for use in high performance displays have been developed by Chinese researchers. 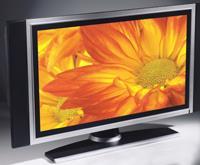 Technology’s strong demand for lightweight and high performance displays, has led to the development of new thin films with improved electrochromic properties.

Jun Peng and colleagues from Northeast Normal University have made molybdenum-doped hexagonal tungsten bronze (Mo-HTB) multi-layer films that change colour from white to light blue and finally to dark blue when controlled by an electric signal.

Until now, polyoxometalates have received considerable attention for applications in electrochromic films; however these materials have limitations which, it appears, can be largely overcome by Mo-HTB films.

The Mo-HTB films are made using a simple layer-by-layer assembly of polyethyleneimine, a colourless conjugated polymer, and a nanoparticle dispersion of Mo-HTB.

The ability of molybdenum (Mo) and tungsten (W) to lose or accept electrons easily and reversibly leads to the electrochromic properties of the films. The colour of Mo-HTB changes according to the oxidation states of Mo and W and the electrochromic contrast can be adjusted by changing the molar ratio of Mo to W.

The films show improved durability, high contrast, fast switching and colouration efficiency. These advantages, along with their ease of fabrication and low cost, make them a key candidate for use in the manufacture of thin film displays.

Peng sees this work developing ’not only to the blue system films whose colours are generated from Mo or W atoms with different oxidation states, but also to multicolour systems produced by other chromophores such as transition metal complexes and composite oxidates’.