Researchers based in Canada, Germany and Japan have overcome the difficulties of collecting diffraction data on small organic molecules to make atomic-scale recordings of their movement. 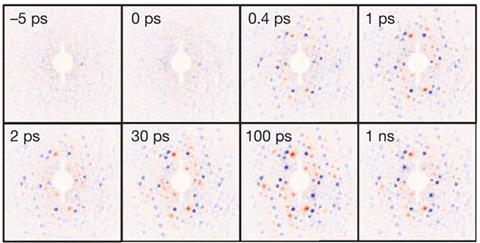 Dwayne Miller’s team constructed movies from patterns produced by firing a bench-top ‘electron gun’ at organic superconductors. Miller, who splits his time between the University of Toronto, Canada, and University of Hamburg, Germany, emphasises the significance of capturing organic molecular changes. ‘You can watch the very essence of organic chemistry and biology,’ he tells Chemistry World.

Femtosecond electron diffraction has already produced atomic scale movies of changes in inorganic lattices. However, small atoms in organic materials scatter electrons weakly, meaning many passes would previously have been needed to gather enough data. And with processes usually triggered by laser pulses, repeated exposure to heat from the laser degrades the molecules before enough data are collected. But Miller’s team’s gun overcomes this by firing bunches of roughly a million electrons in 30 femtosecond flashes that each produce enough data for an image. ‘Electrons scatter a million times more brightly than x-rays, making this source comparable to a million, million x-rays per pulse, which is extremely bright,’ Miller says.

After starting the organic superconductor candidate EDO-TTF2 PF6’s insulator-to-metal phase transition with a laser, the scientists used electron flashes to take 10 snapshots per second. In different experiments they progressively increased the time between laser photoexcitation and the first flash in very fine steps. The increasing delay creates still frames of stages in the transition’s progress separated by as little as a few hundred femtoseconds. By combining diffraction pattern frames Miller’s team could reconstruct a movie tracking changes over a nanosecond. That revealed the transition comprised just three key movements: bending and sliding of the organic chain, and movement of its counter-ion.

Eindhoven University of Technology’s Jom Luiten, who invented the electron bunching approach, says this study confirms the leading role Miller’s team plays in this area. ‘This is beautiful work, state-of-the-art in the new field of femtosecond electron diffraction,’ he says.

For Miller, watching this conversion proceed beyond its transition point puts chemistry into context. ‘At this critical point of no return the system converts from reactants to products, and chemistry reduces to a few key motions,’ he says. ‘If it wasn’t for that, chemistry couldn’t be transferable. Chemists are taught to push arrows and memorise these reactions, and you forget this is really a bit of magic.’