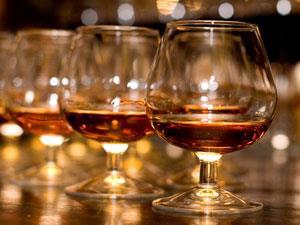 When it comes to brandy, analysis is an important part of the production process. It's usually carried out by a panel sense experts, but now a team of Spanish scientists is set to replace the human palate with an electronic tongue that classifies brandy according to taste, and can even discriminate between aging methods.

An electronic tongue is an analytical system that mimics the sense of taste using an array of sensors and advanced signal-processing methods. Where classical analytical chemistry involves the identification of individual chemical species, an electronic tongue creates a fingerprint using multiple signals from its sensor array. This is useful for looking at alcoholic beverages, in which the species responsible for specific tastes are often unknown.

Electronic tongues have been used successfully to analyse beer, wine and whisky, and now Manel del Valle, from the Autonomous University of Barcelona, Spain, and colleagues have applied the technique to brandy. The team set about assembling a set of six voltammetric sensors, each prepared with different modifiers – metallic nanoparticles, conducting polymers or redox catalysts. Every sensor gave a response to every sample, but in a slightly different way. These responses were combined and treated with data-processing tools before the system was ‘trained’ to classify brandies using a set of human-evaluated samples as a reference.

‘In essence,’ explains del Valle, ‘we are translating expertise from these human testers to a sensor-based analytical system.’

The electronic tongue was found to be 100% accurate when classifying brandy samples according to their taste attributes, and also performed well in the discrimination of different ageing methods and vintages. A further computational model was then constructed for the semi-quantitative detection of undesirable compounds known to cause taste defects. Such information could be invaluable in quality-control processes.

‘This work is a neat illustration of the power of robust computational methods for classification,’ remarks Osvaldo Oliveira, an expert in electronic-tongue systems from the University of São Paulo, Brazil. ‘The classification methods are entirely generic and can be extended to other types of sensor,’ he says, hinting at the application of the technology to the detection of substances that cause food poisoning.

Indeed, del Valle and his colleagues plan to continue their collaborations with the food and beverage industries, and are beginning  to look at analytical methods related to security applications.