Arsenic could be removed from water using a low cost, natural mineral found on the Earth's surface

Arsenic is notoriously toxic, proving fatal to the majority of living organisms in high doses. Elevated levels of arsenic in groundwater in countries such as Bangladesh pose a serious threat to human health. But traditional methods to remove the arsenic struggle to eliminate the more dominant arsenic ion, arsenite.

Now, Kang Li and colleagues from Harbin Medical University have removed arsenite from water samples using ferrihydrite - a low cost, natural mineral found on the Earth’s surface. Already known to absorb arsenic, its efficiency is usually hindered by its low surface area. The team overcame this by combining two layers of ferrihydrite, increasing its surface area and loading capacity. Arsenite was selectively removed from water, even in the presence of other anions with similar molecular structures. Removal of the arsenite from the surface of the ferrihydrite material was easily achieved by washing it with an alkali solultion. After a heat treatment, the mesoporous material could be reused up to ten times. 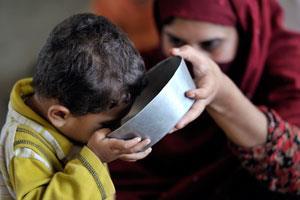 Li believes that the recycling aspect holds the greatest challenge for future practical applications for the material. ’If magnetic nanoparticles could be loaded in the channels of the two-line ferrihydrite, recycling would become even easier,’ he says.

’The incorporation of arsenic into the structure of the in situ formed iron oxide nanoparticles seems to be a more promising way from the viewpoint of real applications.’