Elusive cation caught in a cage

The highly reactive germanium dication trapped naked inside a cryptand

Chemists have isolated the elusive and highly reactive germanium dication by trapping it in a molecular cage. Kim Baines and her team at the University of Western Ontario, Canada, hope the same approach could be used to capture unknown cations of other main group elements.

Germanium, which sits below silicon and carbon in the periodic table, typically forms compounds with strong covalent bonds - and the highly reactive germanium dication, stripped of stabilising ligands, had never been detected. But by using cryptand [2.2.2] - a bicyclic cage-like polyether - the team has captured Ge2+ in a form which behaves like a free, ’naked’ dication. 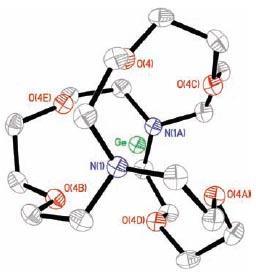 In the resulting germanium-cryptand-triflate complex, Ge2+ is protected not just from anions, but also from Lewis bases such as solvent molecules. Baines attributes the method’s success to the cryptand’s ability to encapsulate Ge2+ in three dimensions. Cryptands are often used to separate stable metal cations such as Ca2+ and Na+ from their associated anions but this is the first time they have been used for a lighter p block element - the first doubly charged ion of a non-metal ever reported.

’It’s exciting because it’s a new approach to be able to look at "almost free" cations’, says Baines. ’Having done this with germanium we’re hoping others will be inspired to try silicon, phosphorus and some of the other lighter main group elements where it will have even more of an impact.’

X ray analysis of the crystal structure showed that the dication has no interactions with the two triflate ions and no strong bonds to any of the atoms in the surrounding cryptand.

’You can’t say it’s completely free but the key is that it’s not tightly bound and therefore easy to displace,’ says Baines. Preliminary experiments have shown the caged cation will react with anionic nucleophiles such as tert-butoxide.

Thomas M?ller, from the University of Oldenburg, Germany says this research could lead to a new area of main group chemistry. ’Nobody realised someone would be able to strip off all the substituents to prepare Ge2+. Not only did they synthesise this compound they also showed that they can use it in further reactions.’

The lack of strong bonds makes the resulting cryptand complex a potentially good precursor to Ge(II) compounds. ’It’s an exciting advance,’ adds Paul Lickiss of Imperial College London. ’It has lots of potential for synthesis and if you could extend the method to silicon too, for example, that would be very interesting.’