Key intermediate in organic catalytic systems has at last been captured and characterised by NMR, confirming its existence

Chemists in Germany have succeeded in trapping an elusive intermediate involved in a key synthetic reaction catalysed by an organic molecule. The finding is important because it provides a clearer understanding of reaction mechanisms that are central to the rapidly expanding field of asymmetric organocatalysis. This in turn should help scientists to develop more efficient catalysts based on organic compounds.

Stereochemical control is a crucial aspect of organic synthesis, and typically catalysts consist of systems based on expensive transition metals, or enzymes, which are relatively fragile. Organic molecules therefore provide an attractive way to catalyse important synthetic reactions. One such reaction is aldolisation catalysed by secondary amines. This reaction is believed to proceed through the formation of an enamine (C=C-N) intermediate, but there had been no direct experimental evidence for this.

Now, however, this missing link has been caught on camera. Markus Schmid, Kirsten Zeitler and Ruth Gschwind of the University of Regensberg used NMR to follow the self-aldolisation of propionaldehyde catalysed by the secondary amine proline. The key to their reaction system was to use the solvent dimethylsulfoxide, which is able to hydrogen bond to the hydroxylic protons of the enamine intermediate and effectively shackle the molecule, hugely slowing down its ability to react further and allowing it to be unambiguously detected by NMR. 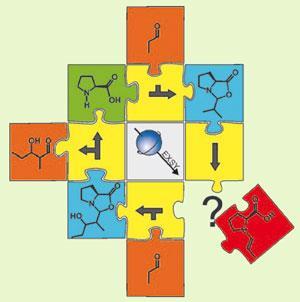 The researchers pinned down the missing piece of the jigsaw, using NMR to characterise the elusive enamine intermediate of nucleophilic proline catalysis

’In our system the enamine intermediate is highly stable,’ says Schmid. ’The finding should help us to understand better the mechanistic background of these reactions.’

Benjamin List, an expert in organocatalysis at the Max Planck Institute in Muelheim an der Ruhr in Germany, applauds the work. ’Reactions of carbonyl compounds with electrophiles that are catalysed by secondary amines such as proline have always been believed to proceed via enamine intermediates,’ he says. ’However, at least when it comes to proline, such species have been purely hypothetical and proline enamines have never been detected, despite probably many attempts, including from my own group. The current paper finally and unambiguously proves the existence of the proline enamine and is clearly bound to become a "classic" in organocatalysis.’