Scientists in Russia have observed water dimers in atmospheric conditions for the first time, following 40 years of research

Water vapour is the most important greenhouse gas in the atmosphere, with a crucial role in the radiative and chemical processes taking place on Earth. Scientists have long debated the presence of water dimers - two water molecules held together with a hydrogen bond - in this vapour. Such dimers would have a considerable effect on the vapour’s behaviour and therefore our understanding of the earth’s climate. But for decades scientists have been unable to find evidence of dimers under atmospheric conditions. 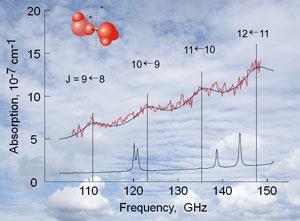 The vibrational spectra of water monomers and dimers overlap too much, and the water monomer spectrum too intense, to be of use in detecting water dimers. Therefore, the rotational spectrum of the dimer, a distinct pattern of four peaks in the millimeter-wave region, is a better candidate for identification. However, water dimers are predicted to account for less than 1% of water vapour in atmospheric conditions, so detecting it requires a degree of sensitivity that previous groups have been unable to attain.

‘The sensitivity of the instrument is critical [to observing the dimer spectrum],’ says Mikhail Tretyakov, one of the authors at the Russian Academy of Sciences in Nizhny Novgorod. The group has spent over a decade developing a high sensitivity spectrometer, which they have now used to detect the rotational spectrum of the dimer in water vapour at 296K and 0.017atm. ‘The sensitivity of our instrument is an order of magnitude higher than the sensitivity of any known analogues,’ Tretyakov says. ‘That’s why we could observe this spectrum and other researchers in the past could not.’

‘It’s the first time anyone has been able to observe transitions of the water dimer under equilibrium room temperature conditions,’ says Richard Saykally at the University of California, Berkeley, US. ‘People would love to be able to detect them but it is extremely difficult - that’s why this particular paper is an important step forward.’ However, Saykally also points to a loose end in the research – the observed dimer peaks are four times broader than predicted.

The group believes this broadening is due to a slight asymmetry in the dimer, which has not been considered in theoretical calculations. ‘It gives additional splitting of the individual spectral lines - essentially you see this peak as a sum of thousands of lines – making it broader,’ says Tretyakov. ‘It’s quite difficult to check but we hope that in the near future we can increase the sensitivity of our spectrometer. This will allow us to investigate these peaks in detail and hopefully we’ll understand the nature of this broadening.’