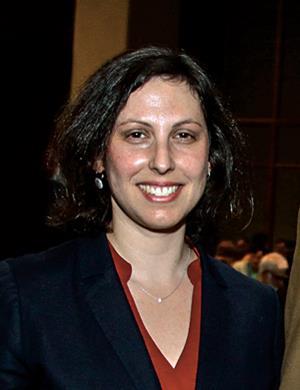 Emily Weiss is an associate professor of chemistry at Northwestern University, US. Research in the Weiss group looks at the fundamental physical chemistry of colloidal semiconductor quantum dots in both the solution and solid phase.

How would you describe your overall research aims?

We would like to understand the behaviour of electrons and energy at interfaces between different types of materials – for instance, organic and inorganic materials – since interfaces often dominate the performance of devices, such as photovoltaic cells, LEDs, and sensors, made of these materials. As nanomaterials have a large surface-area-to-volume ratio, they also have a large density of interfaces, so nanostructures are ideal model systems for this research.

Can you tell me what you’re working on at the moment?

We’re working on several projects. One involves measuring the rate electron movement across the interface between a nanoparticle and a molecule in order to optimise this interface for chemical catalysis. The nanoparticle in this case absorbs photons, which give it the energy to perform the redox process.

Another project focuses on designing two-dimensional arrays of nanoparticles that can split and combine quanta of energy into larger or smaller quanta and transport these packets of energy around the array. This ability to arbitrarily splice up packets of energy and recombine them at a remote location could be interesting for both photovoltaics and cryptography.

We also do a bit of vibrational spectroscopy and are trying to identify the specific chemical bonds that participate in the loss mechanisms within a nanostructure. In other words, how is electronic energy within a nanoparticle lost as heat? What is the chemical mechanism of that process?

How did you first become involved with the field of quantum dots?

I first became interested at an NSF conference in a remote location in Argentina. I saw several people speak about quantum dots at that conference, and I thought they were just the perfect combination of molecular chromophores – which I studied as a graduate student – and bulk semiconductors, and therefore very interesting.

How do you study the surface chemistry of species with such small surface areas?

It’s challenging, but we use many different methods (and sometimes have to adapt these methods for nanoparticles). It turns out that many analytical methods useful for organic molecules (such as NMR) are also useful for characterising the surfaces of nanoparticles, if the inherent heterogeneity in these systems is taken into account. Optical spectroscopy is also key for understanding the surface chemistry of nanoparticles, because, since the particles have such high surface areas, their optical properties are very sensitive to their surface chemistry.

What are the advantages of using quantum dots as photosensitisers over other materials (dyes, bulk materials, etc)?

Their major advantage over organic dyes is their stability to continuous illumination. They degrade less. Their advantage over bulk materials is the tunability of their optical spectra and their redox potentials with simple synthetic adjustments to their size and surface chemistry.

Where do you get the inspiration for your research?

Mostly from my students, who come up with interesting questions all of the time, and from nature. Biology presents many incredibly complex and interesting systems that would be remarkable to reproduce chemically.

I think the one-on-one mentoring of students and postdocs is the most satisfying part of the job. They come to you as blank slates and they leave (hopefully) as a top-5 expert in the world in their little field, and as a generalist who can attack any problem in science.

Do you have any advice for younger researchers considering a career in academia?

Academia gives you great freedom in many respects – in your choice of work, in your schedule, and in your mode of work (ie, the balance of daily activities). I would say that being a faculty member is about a lot more than science, and the management and communications aspects of it make it both challenging and interesting for scientists, who are usually inherently introverted. Nothing beats being able to change your focus every few years in order to go after the problems that you find most interesting. Academia allows you to do that.