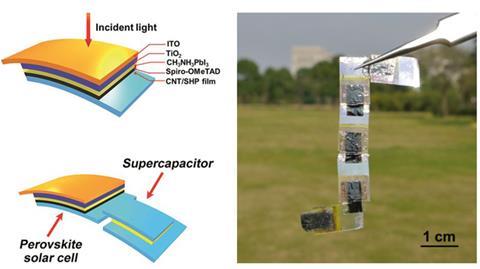 The modules can be fused into various patterns, depending on the specific application

Scientists in China have developed a new method for connecting energy devices without using wires. Not only are the devices easy to make, they continue to work even when bent or twisted – a vital trait for flexible electronics.

Traditionally, energy devices involve modules connected in a series by electrically conducting wires. Although this is the standard system, fabricating such devices is complicated and costly, and the risk of short circuits means these devices also pose a serious safety hazard.

These difficulties are well understood by Hao Sun, a scientist at the Fudan University in Shanghai, China. Sun used to make flexible electronics in the conventional way: ‘I found the connecting process quite time-consuming and complex, as well as the sacrifice of the flexibility and integrated level of the resulting module,’ he says.

This drove Sun and his co-workers to come up with a better way of connecting modules – by combining electrically conducting carbon nanotube sheets with a self-healing polymer. Overlapping the edges of the modules then pressing them together initiates hydrogen bonds in the polymer to fuse the molecules together. This fusing process, which takes only a few seconds, connects carbon nanotubes in the different modules, allowing a current to pass between them.

Sun says this work ‘represents the first success in connecting flexible energy devices directly without using any conducting wires or circuits’. The team showed the practicality of their approach by applying the system to supercapacitors as well as solar cells. In the future, they hope to design further fusible sensors to fabricate self-powered devices with various functions.

Keon Jae Lee, an expert in energy devices at the Korea Advanced Institute of Science and Technology (KAIST), says ‘this new technique could be applied to the latest electronics including portable, flexible, and wearable devices as a simple and efficient connection tool’.