US scientists have cut the side-effects of cancer treatment in animal trials by carefully controlling the number of drug molecules attached to the antibodies used for chemotherapy.

Antibodies can be engineered to bind to specific molecules or ’antigens’ on the surface of cancer cells, so attached drugs can be delivered directly to tumours.

Now a team led by William Mallet and Jagath Junutula at biotechnology firm Genentech in California has found a new way to chemically bind anticancer drugs to specific sites on antibodies. Previously, scientists have attached drugs to antibodies via their constituent amino acids - usually lysines or cysteines.

But this approach means that where and how many drug molecules attach to the antibody varies - making it difficult to gauge the right dose to administer to patients. Antibodies carrying large numbers of drug molecules have been found to be no more effective in treating cancers but can cause more side-effects in patients. 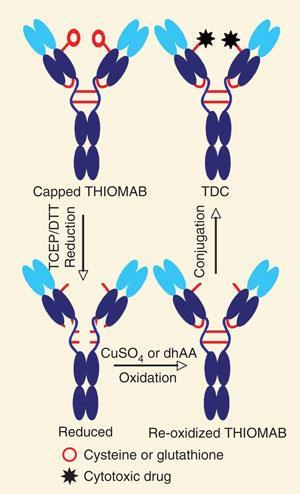 The new technique ensures that anticancer drugs bind to the antibody at fixed sites and in defined amounts. The scientists introduced two new cysteine amino acid residues into their antibodies - which they call THIOMABs - and conjugated drugs to these instead of relying on amino acids that were naturally present.

The engineered cysteines can’t immediately be used to attach drug molecules, because they are locked in disulphide bonds with free cysteine (present in the culture medium, or glutathione, naturally produced by cells that express the THIOMAB antibodies). To get around this problem, the scientists first added a reducing agent to break the bonds, exposing the functional thiol groups of the cysteines. Because this also breaks naturally occurring disulfide bonds within the antibodies, the team next had to reoxidise their antibodies to repair them. This process leaves only the thiols of the engineered cysteines available for conjugation.

’[This new approach] might provide a way to generate drug conjugates that have an expanded therapeutic index’, says Mallet. The THIOMAB conjugates are as effective at treating cancers in mice as previous ones with approximately half the drug dose.

The approach can be used with a wide range of different conjugates, provided the molecule linking the conjugate to the cysteine forms a thiolether bond. ’Some of the key features of this work are that they have coupled a potent drug in such as way that this technology can be used to couple practically anything - for example enzymes, toxins, radio-isotope ligands and photodynamic therapy drugs,’ says Mahendra Deonarain, head of the recombinant antibody therapeutics laboratory at Imperial College London, UK.

David Thurston, professor of anticancer drug discovery at Cancer Research UK, described the work as a ’major step forward’ that should lead to more-effective cancer treatments. ’In animal models, these new antibody-drug conjugates are more effective at killing cancer cells than previous generations of conjugates and, importantly, can be given at much higher doses as they are less toxic,’ he says.