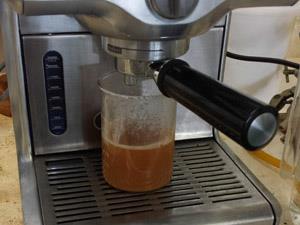 Coffee machines could become essential pieces of lab kit for natural product chemists, for reasons beyond the power of a caffeine buzz. Researchers in Australia have used an unmodified household espresso maker to get nearly pure shikimic acid – a raw material for Roche’s antiviral drug Tamiflu – from the spice star anise.

‘Making coffee with an espresso machine is all about extracting flavour and aroma compounds,’ observes Jason Smith from the University of Tasmania, Hobart. When Smith got a new machine at home, he took his old one to the lab to extend those principles to other natural products. ‘We got a great result on the first attempt,’ Smith stresses.

Espresso makers pump water at temperatures up to 96°C and around nine times atmospheric pressure, which is ideal for pressurised hot water extraction. The University of Tasmania chemists could fit 20g of ground star anise in the ‘portafilter’ of a Breville 800ES, which costs around £200 new. They extracted the spice’s constituent chemicals into a mixture of ethanol and water for two minutes, repeating this procedure on two different samples. After a simple solid–liquid extraction workup – but not chromatography – they got over 2g of roughly 90% pure off-white shikimic acid containing traces of solvent.

‘This method enables the particularly rapid isolation of natural products while minimising extraction of plant pigments that often complicate purification,’ explains team member Alex Bissember. Consequently, although espresso machines won’t be contributing to large-scale drug syntheses, they could help discover valuable chemicals from nature, such as new drug candidates. ‘This method will facilitate screening of plant material and has the potential to expedite bioprospecting,’ Bissember adds.

‘This work represents a major achievement,’ says Mara Freire from the University of Aveiro, Portugal, who extracts biomolecules using ionic liquids. ‘This low-cost, fast and efficient technology avoids the requirement for far more expensive equipment, unfortunately not available nowadays to all laboratories.’

Smith, Bissember and their teammates are now extracting other chemicals from plants, with preliminary results indicating that ‘espresso extraction’ could work well with structural classes including sesquiterpenes and glycosides. The simplicity of their method will also surely lead many others to try exploiting espresso machines – if, in fact, they are not already. Smith admits he and his colleagues found it hard to believe others hadn’t done such extractions before. ‘It seemed so obvious,’ he comments. Freire, for one, is determined she’ll test the approach in the near future.