ESRF upgrade gears up for industry

The European Synchrotron Radiation Facility (ESRF) in Grenoble, France, has outlined the improvements that would make it the most powerful instrument of its kind in the world

The European Synchrotron Radiation Facility (ESRF) in Grenoble, France, now close to the completion of the first phase of an important upgrade, has called on its user community to discuss the scientific prospects of a second phase of the upgrade, to be completed by 2020. If it secures funding for the second phase, the ESRF will become the most powerful instrument of its kind in the world. 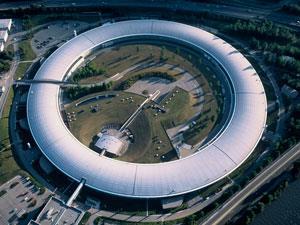 The second phase of the ESRF upgrade is not yet confirmed, and will need to secure â‚¬150 million in funding

The ESRF is Europe’s flagship of interdisciplinary science. Funded by 19 countries, the 844-metre storage ring began operation in 1994 with 15 beamlines on which experiments could be run. Today, 1500 experiments are performed each year by 6400 users on 41 beamlines. Using a wide variety of x-ray instruments, users investigate structures and properties of samples ranging from living cells, biomolecules, nanomaterials, pharmaceuticals and catalysts to alloys.

In 2009 the ESRF started its ambitious upgrade programme. Phase 1 will be completed in 2015, costing €150 million, and focuses on upgrading the beamlines. Phase 2 of the upgrade, starting in 2015, is not yet funded, but the current estimate is also €150 million over six to seven years. Phase 2 will include improvements to the storage ring, increasing the x-ray brilliance (a quantity that combines the number of photons emitted per unit area and the collimation of the beam) by a factor of 30, making it the most powerful instrument of its kind.

On 4-6 February, 318 users met ESRF scientists in five workshops in Grenoble, discussing the science that can be expected if phase 2 of the upgrade goes ahead, says ESRF scientist Andy Fitch, who organised the workshops. ‘It was a broad survey of how the scientific envelope would evolve,’ says Fitch. They discussed faster detectors, better energy and time resolution, and faster data collection. ‘We were identifying things that don’t yet exist, but with current imaging developments people can see that they could become available,’ says Fitch.

The prospect of new undulators and improved focusing lattices, which will increase the coherence of the x-rays, generated significant excitement. ‘The key improvement will be that we can push the resolution of lenseless imaging techniques from 10nm down to around 2nm, or even lower’ says ESRF scientist Theyencheri Narayanan. ‘We will be able to observe the structure of cell membranes and the organelles inside them, as well as synthetic systems like self-assembled peptide nanotubes,’ he adds.

Robert Donovan, an expert in synchrotron and free-electron laser science at the University of Edinburgh, UK, says that the increased coherence ‘would bridge the gap between normal synchrotrons and x-ray free-electron lasers.’ In terms of resolution, x-ray free-electron lasers, such as the one under construction at the German Electron Synchrotron (DESY) in Hamburg, will be unsurpassed. ‘The problem with these lasers is that the intensity is so large that it blows the sample to bits, and you have to put in a new sample every time you try to record something,’ says Donovan. The more gentle coherent radiation from the synchrotron will allow multiple impulses to be used on the same sample. ‘Chemists will investigate extreme conditions, but the real headlines will come from biology; it will revolutionise parts of biology,’ says Donovan.

Nanotechnology will also profit from the increased coherence of x-ray beams. According to Fitch, it will be possible to investigate the size, shape, and the lattice strain of nanoparticles and nanostructures in three dimensions. ‘You will be able to tailor the properties of nanostructures by understanding how they are influenced by structure and strain,’ says Fitch.

While better coherence and collimation allows investigation of smaller crystals, particles, and structures, it will also allow investigation of larger samples. According to Ian Robinson at the University College London, UK, tomographic methods will allow the investigation of how particles are distributed inside centimetre-sized catalysts. In car exhaust catalysts, current production processes cause the platinum not to be distributed optimally. ‘Resolving where the particles go in the catalyst would allow you to optimise their distribution,’ says Robinson.

Research in industrial catalysis was an important subject discussed at the meeting in Grenoble, says Fitch. ‘Catalysis is of enormous economic importance because the whole chemistry industry runs on catalysts and understanding how to optimize them. What became quite clear was that with this new source you could start going much closer to real industrial conditions — actually putting something in a steel pressure vessel and upping the pressure,’ says Fitch.

A new concern raised at the workshop was that with better spatial and time resolution of the experiments, the amount of data produced will also increase substantially, observes Andy Beale, an inorganic chemist at Utrecht University in the Netherlands. ‘We have to make sure that we have sufficient capacity to not only transfer data from the detectors onto a network or storage device, but that this data will be rapidly accessible,’ says Beale. He adds that the ESRF management promised that there will be investment in the infrastructure and computing support.