European Institute of Technology to open in 2010

A flurry of activity in Brussels and Strasbourg has cleared the way for a 2010 launch of the European Institute of Technology (EIT).

A 25 February meeting of the European Union’s Competitiveness Council - a gathering that brings together national ministers responsible for industry and research - recommended that the EIT should become operational ’without delay’.

Ministers said that the process should start with the appointment of the EIT’s governing board, whose home will be agreed later this year. The first research collaborations to be overseen by the EIT should be selected ’in the course of 2009’, with the institute up and running in 2010.

These recommendations are expected to be endorsed by the 27 EU member states when heads of government meet in Brussels, Belgium, on 13 March for their traditional spring summit dedicated to issues concerning the Union’s competitiveness.

Most of the EIT’s work will involve setting up collaborative Knowledge and Innovation Communities (KICs) between academic and industrial research teams. 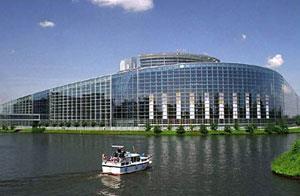 The European Parliament in Strasbourg - backing the EIT

At the committee meeting, Spanish Green MEP David Hammerstein tabled an amendment complaining that the proposal was futile, given what he termed the ’lack of proper core funding’. But the amendment was unanimously defeated.

The funding issue has been a battlefield since 2006, when European Commission president Jose Manuel Barroso proposed creating an institution to rival its Massachusetts namesake.

Barroso suggested initial funding of more than 2 billion euros (?1.5 bn). This prompted parliamentary alarm, given that no provision was made for the EIT when the EU fixed its spending limits for 2007-2013. MEPs feared that EIT would create a further drain on the heavily depleted allocations to the Union’s Seventh Framework Research Programme (7FRP).

A stopgap compromise agreed in December between the Parliament, Commission and the Council of Ministers involves a formula under which initial, six-year funding of just 308.7 million euros (?233m) will be clawed back from the underspend in other EU budgets, notably agriculture subsidies.

But this formula allocates just 3 million euros (?2.2m) for 2008, to cover Commission administrative costs. It means that EIT is unlikely to have the resources to support more than one or two KICs.

The compromise also entails a name change. Although the EIT acronym is retained for the moment, the regulation that constitutes the organisation’s founding statute will use the term ’European Institute of Innovation and Technology’.

The timetable for launching the EIT might be upset by jostling between EU states for the kudos and funding that goes with hosting a new EU institution.

Austria is the latest contender, but states may be reluctant to award Vienna a second EU organisation so soon after selecting Austria to host a new EU human rights institute.

Instead, one of the ten new member states that joined the EU in 2004 is likely to be preferred, with Poland a frontrunner.