Researchers in France and the US have shown how a compound that can be delivered in drinking water can improve the body’s capacity for exercise. The molecule, a cyclic pyrophosphate, interacts with haemoglobin, the blood’s oxygen carrier, encouraging it to release oxygen more easily. The molecule could provide a new way to help people with heart failure, the researchers suggest.

Jean-Marie Lehn of the Institut Louis Pasteur in Strasbourg and colleagues gave the compound, myo-inositol trysphosphate (ITPP), to both healthy mice and mice that were genetically engineered to have severe heart failure. They showed that the more compound that was delivered, the more both sets of animals could exercise. 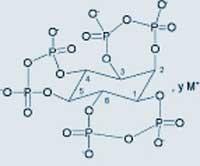 ITPP intereacts with haemoglobin to ease its grip on oxygen

’The ITPP makes the affinity for haemoglobin a little bit lower - by about 30 to 40 per cent,’ says Lehn. ’This is enough to allow it to release more oxygen in tissues which have a loss of oxygen, called hypoxia, but not enough to cause it to release excess oxygen to healthy tissues.’

This could provide a way of delivering more oxygen in oxygen-starved tissues - for example where a damaged heart is unable to pump sufficient blood deep into muscle tissue around the body. The ITPP could make the smaller volumes of blood reaching the tissues surrender its oxygen more readily.

In their experiments the researchers showed that the biggest effect was achieved when the ITPP was delivered by injection directly into the body; however, it still showed a significant effect when it was ingested in drinking water. ’This is very exciting because if it can be taken orally it would make it much more attractive from a medicinal point of view,’ says Lehn.

The molecule could also be used for healthy people who are in extreme physical situations, such as at high altitude. Could it help athletes to cheat? ’This is a question everyone asks,’ says Lehn. ’Of course it could be potentially attractive to an athlete, but the molecule would be easy to detect.’

Commenting on the research, Peter Weissberg, medical director of the UK charity the British Heart Foundation, says, ’If a similar effect can be achieved in man it will raise the possibility of a new treatment to improve debilitating heart failure symptoms.’