Exploiting the chirality of DNA 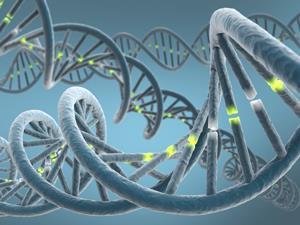 Scientists in France and Germany have made use of DNA as part of a catalytic system for various enantioselective alkylations and addition reactions.

DNA has emerged as an innovative way of controlling the chirality of a reaction product; by binding catalysts in such a way that one enantiomer is preferentially generated. The chiral nature of the helix makes it ideal for asymmetric catalysis. However, this field of research is still in its infancy: reactions are usually run on very small scales, usually in the milligram region, and are difficult to scale-up without using vast amounts of DNA. Now, Stellios Arseniyadis, of ESPCI ParisTech, Michael Smietana, of the University of Montpellier II, and their colleagues have come up with a straightforward solution that allows the catalyst to be recycled – by using DNA covalently bound to cellulose. In fact, cellulose-supported calf thymus DNA is commercially available.

The catalyst, in this case a copper–bipyridine complex, is intercalated into cellulose-supported DNA. The cellulose is packed into a low pressure chromatography column and reactants are simply passed through. Reactions can be performed continuously, and give high yields and high levels of enantioselectivity. Aside from its reusability, other advantages of the system include its biocompatibility, robustness and ease of use.

The team hope organic chemists will start thinking of DNA as part of their synthetic toolbox. ‘People think DNA is more likely to be used by biologists, rather than chemists. As chemists, we would like to think this large biomolecule could be used as a chiral scaffold’.

Sabine Müller of the Ernst Moritz Arndt University Greifswald in Germany, whose research focuses on RNA catalysis, is excited by the progress being made in this area. ‘The application of a DNA-based catalyst linked to cellulose allows new technical solutions and will further enhance the prospects of DNA-based asymmetric catalysis,’ she says.

‘There is still a lot to do,’ says Arseniyadis. ‘Nonetheless, DNA-based asymmetric catalysis is likely to become a fantastic tool for synthetic organic chemists who will be able to choose the appropriate DNA-hybrid catalyst for one specific transformation.’