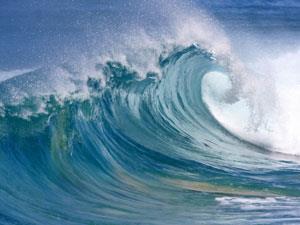 US scientists have used a ligand that can form a complex with a uranyl ion to enable uranium to be extracted from seawater. The concentration of uranium in seawater is low at 3.3 parts per billion, but in the vast oceans, it’s estimated that there’s more than 4.5 billion tons of uranium; considerably more than the amount of uranium in terrestrial ores, say the researchers.

Extracting uranium from the sea is a challenge because it exists as a stable carbonate complex. Linfeng Rao from the Lawrence Berkeley National Laboratory, and colleagues, say that a cyclic imide dioxime ligand – glutarimidedioxime – can compete with carbonate to bind strongly to the uranyl ion to form the complex.

Rao says that there are two unique features in the structure of the uranium–glutarimidedioxime complex. ‘The protons of both oxime groups (–CH=N–OH) are rearranged from the oxygen atom to the nitrogen atom,’ he explains. ‘The middle imide group (–CH–NH–CH–) is deprotonated, resulting in a -1 charged ligand that coordinates to the uranyl cation in a tridentate mode (via the two oxime oxygen atoms and the imide nitrogen atom).’ With such a configuration, he adds, the electron density on the ligand could be delocalised, forming a conjugated system that coordinates strongly to the uranyl cation.

‘It will be interesting to learn how the ligand performs in competition with a peroxide anion, which forms an even stronger complex than carbonate with the uranyl ion in the natural marine photic zone,’ says Mark Antonio, a separation science expert from Argonne National Laboratory, US. He adds that the results from the investigation provide insights that may lead to a viable sequestration of uranium from amongst a myriad other cations.

‘Uranium availability becomes even more important as developing countries such as China and India are ramping up their nuclear power capacities,’ says Wenbin Lin, whose group from the University of North Carolina at Chapel Hill, US, focuses on addressing  fundamental chemical problems relevant to societal issues. ‘If an economically viable technology can be developed to extract uranium from seawater, nuclear power becomes a virtually sustainable clean energy source.’