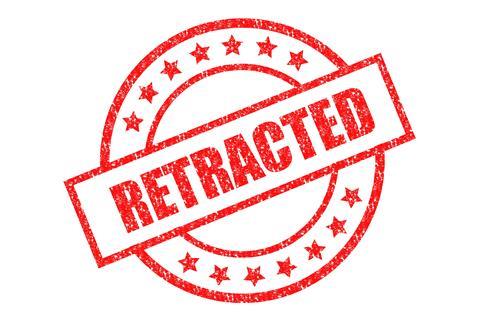 Journals of the Royal Society of Chemistry (RSC) — which also publishes Chemistry World — have today retracted five papers due to a compromised peer review process.

In the present case, all the retraction notices1,2,3,4,5 mention an investigation that identified at least one such fake referee report for each of the five papers.

One author was responsible for the ethical misconduct across all three affected journals, Jamie Humphrey, publisher at the RSC, said in a statement. ‘This author has submitted and published other papers in our journals but as a result of our investigation we are confident that it is only the five published papers mentioned above that have been affected.’

Zhiwen Chen, a professor in the school of environmental and chemical engineering at Shanghai University in China, is an author on all five retracted papers. Chen told Chemistry World: ‘We have no experimental data fraud and plagiarism, only my negligence, leading to the incomplete peer review process.’ He added that he plans to resubmit the papers for peer review and publication once they are retracted.

‘In line with COPE (Committee on Publication Ethics) guidelines, we have been in contact with the author and their institution,’ Humphrey added. ‘As the true identity of the reviewers cannot be identified we have come to the conclusion that all five published papers affected should be retracted.’

Physical Chemistry Chemical Physics (PCCP) has pulled three papers6,7,8 while Chemical Communications9 and Nanoscale10 have retracted one each. According to Web of Science, the PCCP papers have so far been cited by one, five and eight other papers, respectively, while the Chemical Communications study and the Nanoscale review have accumulated three citations each.

Fake peer review is not new: around 500 manuscripts were pulled from the scholarly literature for problems with peer review. And more than half of these papers were authored by researchers at Chinese institutions, according to a recent analysis by Quartz.

One high-profile scandal in April this year saw publishing giant Springer Nature pull 107 papers from the journal Tumour Biology due to fabricated peer review. The journal has since moved to another publisher, SAGE.

In response to the Tumour Biology scandal, the Chinese government announced on 14 June that it plans to cancel research grants of scientists involved in peer review fraud. Last month, the Chinese government announced that 486 researchers were found guilty of misconduct (out of 521 originally implicated). Out of those, 102 authors were found to be mainly responsible and 70 secondarily culpable, while 314 were said to have been guilty of negligence despite not conducting any fraud themselves.

‘By retracting these articles, we are demonstrating that the Royal Society of Chemistry is intolerant to such practice,’ Humphrey said. ‘We also acknowledge that this should not have happened and we are conducting a review to improve our processes and reduce the risk of a similar situation happening again.’