Fastest synthesis in the west

Promising antibiotic with a novel mechanism of action has been synthesized for the first time.

A promising antibiotic with a novel mechanism of action has been synthesized for the first time - and with impressive speed. 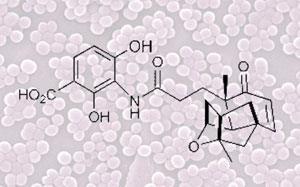 Platensimycin structure and the deadly MRSA

K C Nicolaou’s group, based at the Scripps Research Institute and the University of California, San Diego, US, have published the first total synthesis of platensimycin1, just four months after its discovery was reported2,3.

Scientists at Merck Research Laboratories screened 250 000 natural product extracts to find the antibiotic in a South African soil sample. Merck biologist Jun Wang, who reported the discovery in May, is impressed by how rapidly a total synthesis has followed. One would usually expect at least half a year’s delay, he said.

The fast accomplishment, said Nicolaou, is a tribute to his students, and a reflection of today’s state-of-the-art chemical synthesis. The researchers have, as yet, only created racemic platensimycin (both mirror images of the drug), not the single active enantiomer. ’We are working vigorously on the asymmetric version of a synthesis,’ Nicolaou said.

Platensimycin works differently to the antibiotics developed half a century ago. Those aimed to block production of bacterial cell walls, DNA and proteins; but bacteria like MRSA have since evolved resistance to them. The new antibiotic, however, targets enzymes involved in producing fatty acids, which a bacterium uses to make cell membranes. This type of attack makes it a promising and potent lead for developing future drugs, say researchers.

Although scaled-up production of platensimycin from its original natural product source is not a problem, said a Merck spokesperson, the total synthesis will give access to alternative structures. For example, Nicolaou suggests the cage-like structure on the molecule’s right hand side could be altered to devise analogs that might not be available from the naturally occurring substance. These can be tested for greater anti-bacterial activity.

’The synthesis is practical, concise, and workable for drug development,’ commented Martin J Lear from the National University of Singapore, who is also working on platensimycin synthesis. It is also flexible, he said, so could be extended in an asymmetric way.

Further useful strategies are sure to follow from other research groups, given such an important antibiotic lead. ’The molecule attracts the attention of astute synthetic chemists,’ said Nicolaou. But his group can take the credit for the first synthesis.