Research teams in Britain and Japan have come up with two new ideas to shore up modern medicine’s increasingly creaky defences against bacterial diseases.

Resistance to currently available antibacterial drugs is causing growing concern among doctors who find themselves unable to treat common infections such as Staphylococcus aureus. The highly dangerous MRSA strain of this organism was responsible for 6,381 serious infections in the UK last year of which 1,593 patients died. Hospital acquired infections with MRSA and other organisms are an even bigger threat in the US where they are responsible for an estimated 90,000 deaths a year.

But at the same time as the old antibiotics are losing their effectiveness, the supply of new drugs is drying up, with only two new classes of antibacterials having been developed during the past 30 years. So, medical microbiologists have welcomed two studies by staff at a small Oxford-based pharmaceutical company and Toyama Prefectural University. Respectively, these describe the first in an entirely new category of potential antibiotic agents, and identify a biological pathway that could provide a target for drugs active against a specific group of pathogenic bacteria. 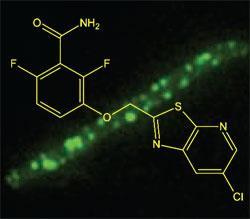 PC190723 causes its target protein (shown fluorescing) to spread randomly through the cell, rather than assemble at the centre

Working with colleagues at universities in the UK and India, Prolysis Ltd researchers have discovered a small molecule that inhibits the function of a protein called FtsZ. This protein plays a key role in bacterial cell division, polymerising to form a ring that eventually forms the wall dividing the two daughter cells. Several small molecules have previously been shown to have in vitro activity against FtsZ, but none has worked so far in a live animal.  David Haydon and his colleagues systematically

modified 500 analogues of one such compound, 3-methoxybenzamide, until they found the candidate drug - called PC190723, the inhibitor combines a benzamide with thiazolopyridine through an ether linkage. This compound was given to mice infected with a normally lethal dose of MRSA, and every one survived.

Lloyd Czaplewski, Prolysis research director, said there is every prospect of the drug providing similar protection to human MRSA patients when it enters clinical trials sometime in the next two years. ’Antibiotics is a pretty unusual branch of pharmaceutical research in that there is a lot of evidence to show that the results in a mouse model correlate well with the clinical outcomes. That is because the drug target, the bacteria, is exactly the same in whatever species you study. So the predictability of the pharmacological response is much greater than in other therapeutic areas,’ he told Chemistry World.

The Prolysis team used a computational approach to analyse where on the FtsZ structure the inhibitor was likely to be binding. The most likely site, a core helix of the protein known as H7, is analogous to the site that anti-cancer drug Taxol is known to bind to tubulin - a structural and functional relative of FtsZ involved in mammalian cell division.

Robert Fecik, of the department of medicinal chemistry at the University of Minnesota said the study is a ’significant advance’ in the search for new antibacterials. ’For the first time (they have) validated FtsZ as a target for antibacterial drug design effective for Staphylococcal infections. PC190723 is a promising candidate for further development, and its discovery is likely to renew interest in other FtsZ inhibitors.’

In the Japanese study, Tohru Dairi’s team have compared the genes used by different bacteria to produce menaquinone, a protein vital for bacterial respiration. They found that that the men genes used in most bacteria to manufacture this protein were missing from four pathogenic species, including Helicobacter pylori which causes stomach ulcers. These species use an alternative biosynthetic pathway, Dairi discovered, which the team named futalosine after the first intermediate molecule. Finding a method of blocking this new pathway should potentially allow more specific treatments as the drug would have no effect on bacteria using the men gene pathway. Dairi told Chemistry World that the aim would be to produce anti-Helicobacter drugs that, unlike current therapies, do not destroy essential lactobacillus bugs and cause severe diarrhoea during treatment. He is currently in talks with a Japanese pharmaceutical company on future development work.

In a commentary on the two papers, David Payne from GlaxoSmithKline’s laboratory in Collegeville, Pennsylvania, US, suggests that a more targeted approach to developing new antibacterials like that described by the Japanese team may be the way forward. ’However, this approach will only be successful with the availability of diagnostics that can very rapidly and specifically identify the specific infecting pathogen, and it may be some time before such tools are available for a range of common pathogens.’