Cancer researchers can see how effective new chemotherapy drugs are at destroying tumours by using the light that causes fireflies to glow in the dark.

A team lead by Ralph Mason at the University of Texas southwestern medical center has published a study using the technique of bioluminescence imaging to monitor changes in the size of tumours after dosing with an experimental drug that cuts off their blood supply.

In their study, cells taken from patients with breast cancer were inoculated with the luciferase gene responsible for the insects’ nocturnal courtship displays. These transformed cells were grafted into laboratory mice. The mice were then given intravenous injections of the chemical luciferin, which is oxidised by the luciferase enzyme to produce oxyluciferin and light. 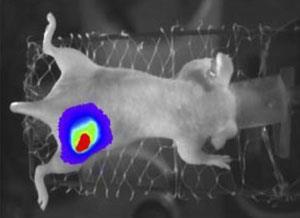 The glowing tumour cells are too dim to be visible to the human eye. But the Dallas-based team cells can detect the light with a highly sensitive camera, like that used to investigate radiation from distant stars.

When the mice were injected with a promising new cancer drug called combretastin A4, the glow disappeared. The drug - a synthetic version of a compound extracted from African bush willow tree (Combretum caffrum) - blocks the formation of new blood vessels supplying the tumour and within half an hour the energy-hungry cells begin to starve to death.

Vascular disrupting drugs like the one used in Mason’s study are attracting a lot of interest from researchers as a relatively safe way of treating cancers. His method allows the size of the tumour to be accurately measured so that researchers can work out the optimal dose to give to human patients - destroying cancer cells while limiting any side-effects in normal tissue.

Magnetic resonance imaging is the current gold standard in measuring tumour shrinkage after chemotherapy but the technology is very costly and can only be used at specialist centres. ’MRI is carried out using a $1million instrument while we did our work on a $50,000 machine that we built ourselves. Anybody with a high school training can use bioluminescence imaging, as it’s not a high tech skill, but for MRI you have to be trained to masters or PhD level. So what we are doing is developing a simpler, faster and cheaper way to carry out preclinical research,’ Mason told Chemistry World.