The discovery that two different coloured crystals can form from the same molybdenum cation has signalled the first experimental evidence for agostic isomers – or agostomers – in organometallic complexes. The crystals, one orange and one blue, arise from different agostic interactions and may lead to new insights into organometallic catalysis where these weak C–H–metal bonds play a key role. 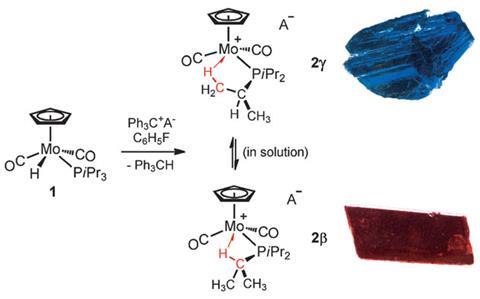 The different agostic isomers form either blue or orange crystals

Morris Bullock and his team at the US Pacific Northwest National Laboratory discovered the agostomers while studying a series of molybdenum complexes as hydrogenation catalysts. ‘During catalytic runs, we only observed saturated (18-electron) organometallic species, but there were several lines of evidence to suggest that 16-electron species should be involved in the catalytic cycle, albeit probably as fleeting intermediates,’ he explains.

One reason why agostic interactions feature highly in organometallic catalysis is their ability to stabilise unsaturated, highly reactive complexes by temporarily protecting the vacant site of the metal complex. Based on earlier work, the team found that their unstable 16-electron intermediate could indeed be stabilised by an agostic interaction with a trialkylphosphine but ‘the discovery of isolable agostomers was serendipitous,’ admits Bullock.

Crucial to their discovery was the crystallisation of the intermediate upon abstraction with the phosphine group. Agostomers may form where more than one C–H bond is available for interaction but previous attempts at isolating the separate species have been severely hampered by rapid interconversion between agostomers in solution. In the crystal state, however, switching between species was no longer an issue leading to the unexpected find of two different coloured crystals growing from the same starting molecule.

Bullock concedes that part of their discovery was down to luck owing to both agostomers being present in significant amounts in solution and that both formed single crystals suitable for diffraction. ‘We can imagine that there may be many agostic complexes out there for which several agostomers exist in solution, but for which only one agostomer will crystallise.’

According to Gerard Parkin at Columbia University, US, the research further highlights why the discovery of agostic interactions had such a profound effect on the way that organometallic chemists view alkyl groups in the first place. ‘The authors have not only been able to obtain the first structural characterisation of a pair of such isomers but have demonstrated that the different agostic interactions impart a distinct electronic structure on the molecule,’ he says. ‘This discovery reinforces the significance of these interactions, which are often undetectable but nevertheless play important roles in governing reactivity’.