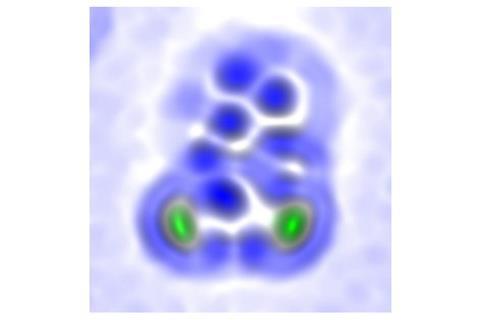 The first atomic resolution images of dissolved ocean compounds have revealed structures of almost 100 diverse molecules that form part of the largest carbon pool on Earth. A better understanding of this enormous carbon reservoir – some of which is estimated to be more than 6000 years old – will help scientists predict how it will react to climate change.

There is as much carbon dissolved in the oceans as there is carbon dioxide in the atmosphere. However, scientists have yet to figure out which compounds make up the marine carbon pool: less than 10% of the approximately 5000 structures are known.

Researchers from universities in Switzerland and the US have now teamed up with specialists in atomic resolution imaging at IBM to shine a light on the diverse range of structures found in oceanic carbon. Samples taken in the North Pacific Ocean – some at the surface, others at 2500m – revealed 94 different compounds in atomic resolution for the first time.

Deep ocean compounds turned out to be predominantly planar aromatic hydrocarbons such as substituted naphthalenes or indenes. These polycyclic aromatic structures are highly resistant to biodegradation and can persist for several thousand years in marine environments.

The surface compounds, on the other hand, had more non-planar aliphatic and cyclic groups. Because this makes them challenging to visualise, the researchers could only assign two out of 46 structures. However, where exactly these compounds come from isn’t clear yet.