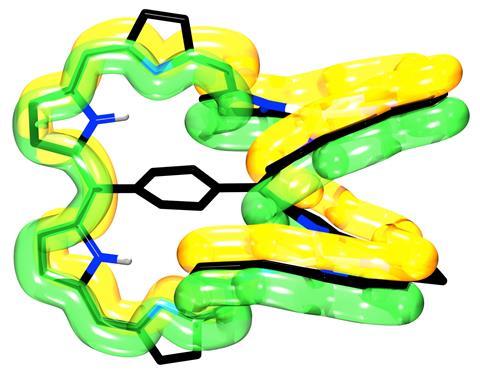 The first quadruply twisted aromatic molecule has been made by chemists in Japan. Its 54 π electrons are packed into a ring that has four 180° twists.

When students first learn about aromaticity, they often memorise Erich Hückel’s rule. It states the number of π electrons a ring system needs to be aromatic. It also states that molecules can only be aromatic if they’re planar.

But since the physical chemist devised the rule in 1931, researchers have bent these rules in all kinds of ways – from bending benzene rings to putting one aromatic ring inside another.

Now, Atsuhiro Osuka’s team from Kyoto University has applied their experience with porphyrin structures to make the first molecule whose aromatic rings system has 180° twists.

However, the first molecules the chemists designed weren’t aromatic at all. The extended bridged porphyrins were simply too floppy and preferred to take on less twisted conformations.

By adding palladium atoms that coordinate to the dodecaporphyrin rings’ nitrogens, the team attempted to make the molecules more rigid. While this did indeed produce several quadruply twisted di-palladium complexes, most of these turned out to be non-aromatic.

Only one of them struck aromaticity gold. Despite this molecule’s less-than-planar structure, its 54 π electrons made up a fully aromatic system as determined by spectral analysis and ring current calculations.