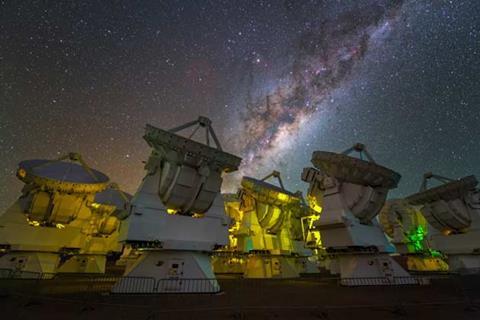 The radiotelescope in Atacama, Chile, has found the first branched molecule ever seen in interstellar space

Interstellar molecule hunters have bagged a prize specimen by detecting the first branched carbon species and at a surprisingly high abundance. The finding is important because it increases the likelihood that the chemistry that occurs within the interstellar medium is capable of producing amino acids as a potential seed for life on Earth. Until now the only non-cyclic molecules found in the vast spaces between stars have had a straight-chain carbon backbone, whereas a branched structure is a key characteristic of amino acids found in living organisms.

The research team, from the Max Planck Institute of Radioastronomy and the University of Cologne, both in Germany, and Cornell University in the US, made its observations with the Atacama Large Millimeter/submillimeter Array (ALMA), in Chile. The telescope array was trained on the star-forming region of Sagittarius B2, 27,000 light years from Earth that is notoriously rich in organic molecules.

The researchers detected a spike in the radio spectrum characteristic of the branched alkyl molecule iso-propyl cyanide. The team had previously made the first interstellar detection of its straight-chain sister molecule n-propyl cyanide. 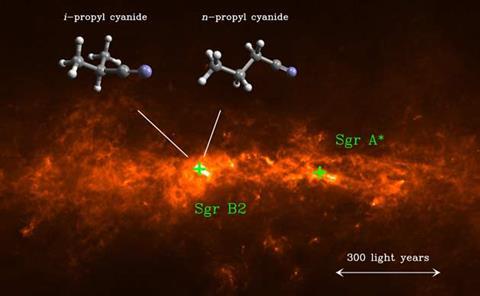 Sagittarius B2, 27,000 light years from Earth, is rich in organic molecules

‘In many of the meteorites we find on Earth there are amino acids and we would like to understand how these molecules form,’ says team member Arnaud Belloche. ‘There are many indications that these amino acids come from interstellar space but so far we have no direct evidence. The detection of this branched molecule connects interstellar chemistry with the molecular inventory of meteorites.’

It may be some time, however, before the first amino acid is detected in the interstellar medium. The relative abundance of the species needed to react to create amino acids is such that even the simplest amino acid would be present in only tiny amounts. ‘My guess is that at least the simplest one is probably there but the emissions are so fine that we cannot detect it yet,’ says Belloche.

Commenting on the finding, astrochemist Martin McCoustra of Heriot-Watt University in the UK, says: ‘The work adds to the growing body of evidence that complex organic molecules are readily formed in and on the icy grains found in the dense clumps of gas from which stars and planetary systems evolve.’

McCoustra adds: ‘Observations of these nitrile derivatives are particularly important for their potential links to prebiotic chemistry. What we see in the gas phase in this environment points to the contents of the icy rubble that will form cometry bodies in this nascent stellar system; comets which, in the case of our own Solar System, went on to seed the ‘Goldilocks’ environment of the young Earth with a prebiotic soup.’