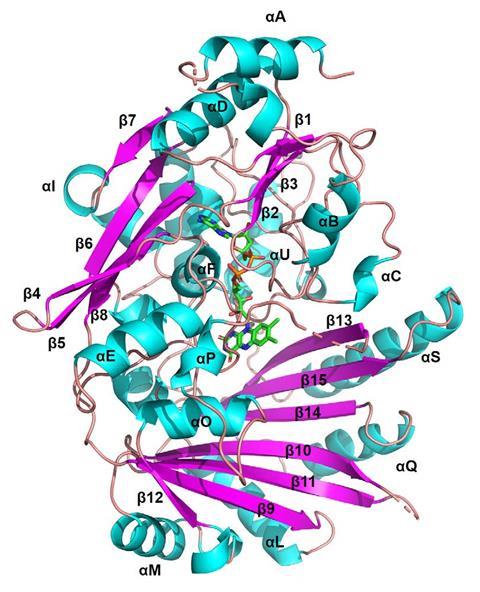 The first enzyme that catalyses Diels–Alder reactions has been found in mulberry plants by an international team of scientists.1 Unlike other enzymes that have been labelled Diels–Alderases, this is the only one that promotes truly concerted intermolecular [4+2] cycloadditions – and it does so better than most synthetic catalysts.

Xiaoguang Lei, from Peking University in China, calls the Diels–Alder reaction one of the most powerful chemical transformations. The concerted cycloaddition between a diene and an alkene to form a cyclohexene is often used in natural product synthesis to build complexity. Ever since Lei and his team synthesised several mulberry compounds with a cyclohexene core2 – clearly the product of a cycloaddition – he had been wondering whether the plant had a Diels–Alder-catalysing enzyme.

‘I think a lot of the things that have been called Diels–Alderases over time, people might argue are not actually that,’ says enzyme chemist Alison Narayan from the University of Michigan in the US, who wasn’t involved in the work. There are some multifunctional enzymes that can produce Diels–Alder adducts, but they might not go through the concerted mechanism that characterises the reaction. One class of enzymes discovered in 2011 promotes only intramolecular [4+2] cycloadditions.

Lei and colleagues have now discovered what they claim is the first true intermolecular Diels–Alderase among the thousands of enzymes in mulberries. Dubbed MaDA – Morus alba Diels–Alderase – the protein completes the last step in the biosynthesis of chalcomoracin. Working together with a diene-producing oxidase, it stitches together a moracin-derived diene and morachalcone. But it also accepts other, similar substrates. ‘You could further engineer this enzyme to make many different structurally diverse cycloadducts,’ Lei points out.

The proposed biosynthetic pathway for MaDA, along with natural products found in mulberry that are representative of Diels–Alder reactions

With a total turnover number – catalytic events per single enzyme during its lifespan – of almost 2000 and an enantioselectivity of nearly 100%, MaDA performs better than both a synthetic Diels–Alderase and Lei’s own chiral boron catalyst. ‘The enzyme definitely beat us,’ Lei laughs.

‘[It] is really exciting as it is an enzymatic reaction that can do convergent synthesis,’ comments Narayan. ‘It’s … a type of transformation that has escaped biocatalysis for the most part.’ Whether the enzyme’s substrate scope is wide enough and its reactivity scalable enough to be of use for synthetic chemists remains to be seen, she says.

Lei and his group are now working on improving MaDA’s ability to work with more and different reactants. They are also looking for other true Diels–Alderases that might be hiding in plants’ biosynthetic machinery.