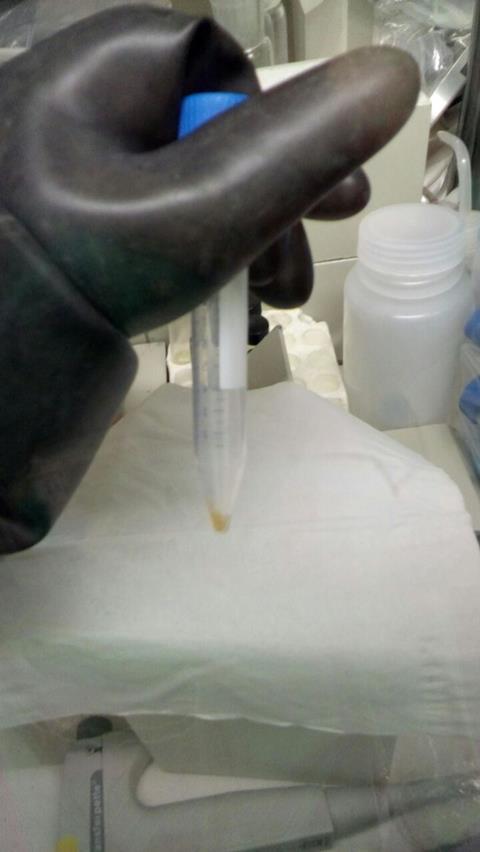 ‘We thought something had gone really wrong,’ says Kristina Kvashnina describing the first time she saw the strange yellow solid that turned out to be a new form of plutonium. The compound is the first stable solid containing pentavalent plutonium, or plutonium in the oxidation state +5. The discovery could change how scientists predict the spread of radioactive contaminants in the environment.

Initially, Kvashnina’s team at the Helmholtz-Zentrum Dresden-Rossendorf in Germany had set out to make plutonium nanoparticles. This was because, just 15 years ago, it became clear that plutonium forms nanoparticles that get carried in groundwater over long distances.

Since the element has a half-life of 24,100 years and forms highly toxic compounds, scientists are studying plutonium’s various chemical forms to better predict how it disperses and how to immobilise it, says radiochemist Annie Kersting from Lawrence Livermore National Laboratory, US. ‘This is important both for accidents as well as long-term storage repository for nuclear waste,’ she says.

Instead of the green nanoparticles Kvashnina had hoped to make, she found ‘a strange yellow phase of a plutonium compound, which nobody had ever seen before’. ‘We brought it to the synchrotron beamline to analyse it and immediately saw that it’s not nanoparticles,’ she recalls.

X-ray experiments probing the number of electrons in the solid’s 5f orbital confirmed that it was indeed plutonium(V) – the element’s first stable solid with this oxidation state. Plutonium is unusual in having a wide range of oxidation states – everything from 0 and +2 and all the states in between up to +7 – but many of these compounds are unstable. ‘Everyone thought those materials were extremely unstable. You can find plutonium(V) in solution, but never in the solid phase,’ Kvashnina says.

The compound, suspected to be NH4PuO2CO3, is stable in air for several months. In water, however, it converts slowly to plutonium(IV).

‘I thought it was a nice study,’ says Kersting, praising the researchers’ careful experiments to test whether they really had made pentavalent plutonium. ‘I think that it has implications for understanding and modelling transport.’

‘There are a lot of studies trying to predict what will happen with radioactive materials over periods of thousand years,’ Kvashnina explains. ‘All these predictions are based on how much we know about plutonium, different species and oxidation state, and how stable they are.’ Her team’s discovery, she suggests, will force chemists to rethink chemical routes and could even affect efforts to clean up contaminated sites.

‘Now more work will have to be done to look at under what other conditions plutonium(V) might be stable,’ says Kersting.

Correction: The headline was changed on 1 November 2019 to make clear that this discovery is the first pentavalent plutonium compound in the solid phase