Earth’s first complex sugars could have formed with a little help from silicate ions, according to a new study by US chemists. Their findings provide support for the role of the much maligned formose reaction in origins of life theories.

The formose reaction, which produces sugars from simple aldehydes, has been implicated in prebiotic synthesis theories for over 60 years. But Joseph Lambert, who led the study at Northwestern University in Illinois, explains that it hasn’t always found favour. ’Mostly it’s been pummelled and attacked because of the fact that the sugars are not stable,’ he says. ’But we don’t have anything else. There is no other chemical reaction that works so well, because the formose reaction is so simple.’

Inspired by a paper published in 19991, detailing the reaction of sodium silicate (Na??2SO3?) with certain polyhydroxy compounds, Lambert wondered if sugars - biologically the most important of the polyhydroxy compounds - would also react with sodium silicate. Not only has he now proved that it does, his group has also succeeded in showing that the silicate ions act to stabilise the resulting sugar silicates2, potentially solving a long-standing problem.

According to spikes in the team’s mass spectra, sugars like glycoaldehyde and glyceraldehydes, which contain two or three carbons respectively, join together to form larger three- to six-carbon sugars. These then complex with silicate ions to form stable sugar silicates. Theoretically, says Lambert, it is possible that the sugars that make up the building blocks of RNA could have formed in a similar way on early Earth. 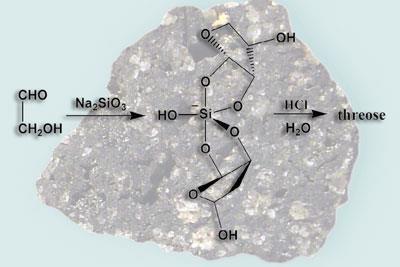 Bottom-up synthesis of threose from glycoaldehyde

The idea is feasible, says Nils Holm, who studies prebiotic synthesis at the University of Stockholm in Sweden. But he points out that such reactions would have required highly alkaline environments. ’Their model requires free silicate ions, which you may achieve at high pH,’ he says. ’Silicate minerals in rocks - like olivine - are easily weathered, but the secondary minerals that are formed consume most of the silica that is liberated during weathering. However, the process may indeed create high pH.’

Lambert adds that their theory doesn’t rest solely on free silicate ions. The reactions could also happen on the surface of certain clays with high local pH. His team are currently studying clays as catalysts, but think that clays could also help explain the chirality or handedness of organic molecules. ’One of the other things that is necessary to explain any sort of role in life is to make it chiral,’ says Lambert. ’There are many examples of chiral clays, and so if we can make chiral sugars this way that would be very exciting.’