US researchers have created milligrams of pure heparin using enzymes and chemicals - a practical laboratory synthesis that could avoid the contamination issues surrounding the blood-thinning drug, which currently has to be sourced from animal tissue.

Robert Linhardt and his colleagues at Rensselaer Polytechnic Institute in Troy believe they will be able to scale up the process sufficiently to carry out clinical trials on their artificial heparin in as little as five years. Linhardt presented the work at the American Chemical Society’s Fall 2008 meeting in Philadelphia.

Around 100 tonnes of heparin is used around the world every year, injected into patients to reduce the risks of blood clots. At the moment, heparin can’t be made synthetically and much of it is harvested by scraping and drying mucus from pig intestines. Around half comes from China, where there is little scope of guaranteeing the quality of the final product because heparin is extracted in small family-run workshops from pigs reared on hundreds of different farms. Recently, several batches of tainted Chinese heparin had to be withdrawn after they were linked to the deaths of over 80 patients in the US.

Now, Linhardt’s team - who were also the first to identify the contaminant in the tainted batches as oversulfated chondroitin sulfate - have come up with a potentially safer way to produce heparin. The researchers grew flasks of the gut bacteria E. coli, then converted its naturally produced carbohydrate coat to heparin in just a few steps using enzymes and chemical treatment. 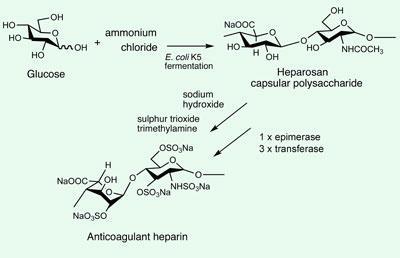 The chemoenzymatic synthesis of heparin from E. coli’s carbohydrate coat

Linhardt says the key to the procedure was starting with the carbohydrate capsule that E coli produces to hide itself from the human immune system. The capsule is made from heparosan - a polysachharide that is already quite similar to heparin.

The team first chemically removed acetyl groups from the heparosan with sodium hydroxide and added a sulfate group using sulfur trioxide trimethylamine. Then, using four enzymes found in all mammals that produce heparin, they introduced further modifications, including the addition of three more sulfates at different positions on the molecule to get to heparin.

The checked the structure of the compound using NMR and showed that the synthetic compound could stop blood clotting as well as heparin derived from animals. To date, however, the team have only made a total of around 100mg of pure heparin - barely enough for a single dose. That is still a million times more than produced by a 2003 total synthesis of heparin, from researchers at the Massachusetts Institute of Technology, US.

’Right now, the scale of our production is very low,’ Linhardt concedes, adding that they’ll need to scale up the process around a billion fold for it to be commercially viable. ’Until we make kilogram amounts of material and demonstrate its bioequivalence it would be hard for [drug companies] to justify the investment in new drug development.’ But he’s confident that the process can be scaled up by engineering the bacteria to produce more of the carbohydrate capsule starting material.

Dallas Rabenstein, an analytical chemist at the University of California in Riverside and heparin expert, points out that in some cases synthetic forms of heparin with slightly different structures can work better as anticoagulants. ’The need for an alternative source of heparin was clearly demonstrated recently,’ says Rabenstein. ’If the chemoenzymatic synthesis described by Linhardt and colleagues can be scaled up to produce the quantities used in medicine, particularly if the synthetic heparin can be enriched in the unique pentasaccharide sequence responsible for the anticoagulant activity of heparin, this will be a significant development.’

Linhardt says he could look at making more active forms of heparin in the future but for now, the priority is making the naturally occurring form of the compound. ’If we can make a generic equivalent, we believe we can get that approved more easily by the US Food and Drug Administration,’ he explains.