Tellurene becomes the first 2D material in the chalcogen group

A monolayer version of the element tellurium, tellurene, is the latest member of the 2D materials family, which includes graphene but also more obscure compounds such as antimonene. Tellurene is the first flat material in the chalcogen group. 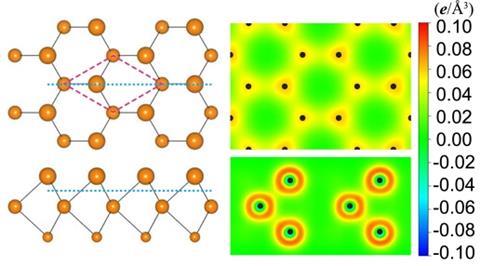 Top and side views of the optimised structures of tellurene, with electron density diagrams

2D materials have intriguing properties that the bulk materials often lack – graphene, for example, is about 200 times stronger than steel despite comprising only a single layer of atoms and conducts electricity better than most metals. The researchers who made tellurene found that the element’s flat form has high charge carrier mobility, making it potentially useful for ultrathin electronic devices.

The tellurene monolayer has a three-atom structure similar to molybdenum disulfide: a central, metal-like tellurium atom is sandwiched between two semiconductor-like tellurium atoms. As a metalloid, tellurium can act as a metal in some and a non-metal in other cases.

Most atomically thin materials are made by exfoliating the bulk element or growing a layer from individual atoms deposited on a surface. Tellurium, however, spontaneously rearranges into its monolayer structure once a bulk crystal is shaved down to a certain thickness, theoretical calculations show.

So far the researchers’ experiments only managed to produce a second, metastable version of tellurene. They hope, however, that changing the underlying substrate might help them produce stable tellurene as well as a selenene, a yet to be discovered 2D version of selenium.