Researchers have succeeded in making an elusive component of organic electronics: a flash memory transistor that can be incorporated into a thin, flexible plastic sheet.

Flash memory is a so-called non-volatile memory that can retain information for a long time after electrical power has been removed. Silicon flash memory transistors are used in many small devices such as cameras and MP3 players. 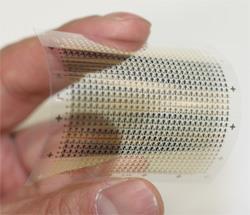 However, creating flexible organic flash memory devices has been a challenge. Flash memory relies on a so-called ’floating gate’, a conducting component of the transistor that is fully enclosed in an insulating material, the gate dielectric, isolating it electrically. Despite its isolation, if the dielectric is sufficiently thin, electronic charge can be brought onto the floating gate by applying a large enough voltage, causing charge to be transferred in a way that is poorly understood but is believed to involve quantum tunnelling or thermal emission. The insulated floating gate retains the charge for a long time - years in the case of silicon-based devices - until the charge is erased by applying a voltage of opposite polarity. The presence of charge on the floating gate affects the electronic properties of the transistor, which can be detected.

The difficulty for organic systems has been in finding a material suitable for a dielectric layer that can be made sufficiently thin to allow charge transfer to the floating gate, yet can be processed at low enough temperatures to prevent the plastic substrate on which the organic transistors are being assembled on from melting - typically around 150?C.

Now, researchers from Japan, Germany and Austria have successfully identified a way to create a suitable dielectric and have made an array of 676 organic flash memory transistors on a sheet of thin, flexible plastic. The team constructed thin dielectric layers from two components - a self-assembled monolayer of n-octadecylphosphonic acid, which is 2nm thick, and a 4nm layer of aluminium oxide, achieved by oxidising the surface of the aluminium which forms the floating gate itself. In this way the floating gate is isolated by a dielectric only 6nm thick. 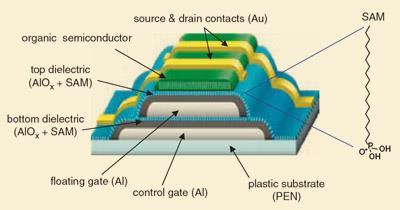 Cross section of the floating-gate transistors

Importantly, the floating gate can be programmed and erased by a potential difference of only 6V, similar to silicon-based devices. Other organic memory systems require voltages substantially greater than this.

Mohammed Mabrook, who researches organic memory devices at Bangor University in the UK, is highly impressed by the research. ’It’s a fantastic piece of work,’ he says. ’What is impressive is that they have achieved an operating voltage of below six volts whereas other organic memory transistors need around 30 volts.’ Making an array of transistors rather just a single one is also an achievement, he says, as it is important for large area devices such as displays.