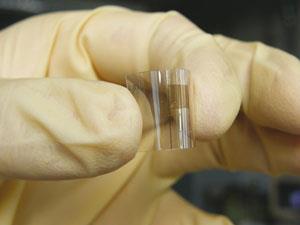 Scientists from Germany have created a supercapacitor that is just 50 nanometres thick and less than 5 millimetres wide. The tiny supercapacitor has been successfully integrated into miniaturised, flexible electronic circuits.

Portable consumer electronics, like mobile phones and cameras, are rapidly advancing to meet the demands of modern society. They are becoming smaller, lighter, thinner, flexible and wearable. A bottleneck to further miniaturisation has been reducing the size and increasing the flexibility of the power supply component of electronic circuits – often a supercapacitor.

Supercapacitors are attractive power supplies as they can store almost as much energy as a battery, but also have the advantage of the high-speed energy discharge that is characteristic of normal capacitors. The electrodes in supercapacitor devices are normally made from carbon or conducting polymers. Manganese oxide is a more environmentally friendly and less costly alternative, but suffers from lower capacitance as it is not very electronically conductive. It is also not naturally flexible or strong.

Chenglin Yan at the Leibniz Institute for Solid State and Materials Research in Dresden and colleagues have now found a way to make manganese oxide electrodes thin and bendy. They vaporised solid manganese oxide using an electron beam and then let the gaseous atoms precipitate into thin flexible films. The team then incorporated very thin layers of gold into the manganese oxide films to improve their electrical conductivity.

‘Achieving long-term stability of the microsupercapacitor was the most challenging part,’ says Yan – a difficult task with such thin electrodes. Care had to be taken to adhere the manganese oxide films securely to the substrate.

Not only is the microsupercapacitor tiny and bendy, it can store more energy and provide more power per unit volume than state-of-the-art supercapacitors. Douglas Ivey of the University of Alberta, Canada, who is well-known for his research on thin film deposition methods for microelectronics, was impressed by the performance of Yan and co-workers’ supercapacitor: ‘High volumetric energy and power densities, along with excellent cyclability, are achieved in this small, flexible supercapacitor device.’ However, he says, the high cost of gold is one downside to the design.

Yan’s group are now experimenting with replacing gold with a cheaper metal, such as manganese, in order to reduce the cost of their supercapacitor.