Scientists in Germany say that a rechargeable battery that works on the basis of fluoride transfer between electrodes could have a better storage capacity than current batteries.

The battery, developed by Maximilian Fichtner and Munnangi Anji Reddy from the Karlsruhe Institute of Technology, is based on a ’fluoride shuttle’ - the reversible transfer of fluoride anions from one electrode to the other, depending on whether the battery is being charged or discharged.

Fichtner says that they were motivated by the limited energy storage capacities of current batteries. Future batteries need higher energy densities, so that lightweight batteries can perform the same as, or better than, heavier batteries. ’This is particularly important for mobile applications, because everybody would like to have smart computers and cell phones with longer operation times,’ says Fichtner. The researchers focused on a fluoride-based battery system because in theory it has a high potential for storage capacity. ’Since it is not necessary to use lithium in the battery, this also makes it safer,’ Fichtner adds. 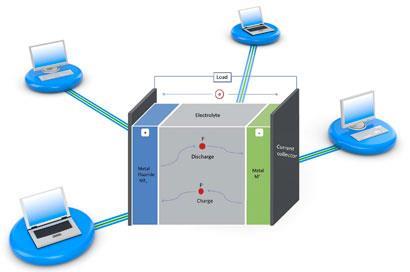 The lightweight batteries perform as well as heavier batteries, which is important for mobile applications

The researchers prepared various fluoride nanocomposites for the cathode and electrolyte, and cerium metal was used as the anode. The cathode-electrolyte-anode layers were pressed to pellets to test their performance in a battery.

John Goodenough, an expert in battery materials from the University of Texas at Austin, US, emphasises the importance of alternative systems to the lithium ion battery. He says large volume changes in the electrodes of the fluoride shuttle battery affect its cycle life, so to be competitive, a solid-liquid interface needs to be devised.

Fichtner says further improvements may result in a battery system composed of sustainable materials with a storage capacity several times higher than the current lithium ion battery. The first fluoride batteries could only operate at elevated temperatures and the capacity faded with use, but Fichtner expects that by contributions of scientists from various fields, these limitations can be addressed.