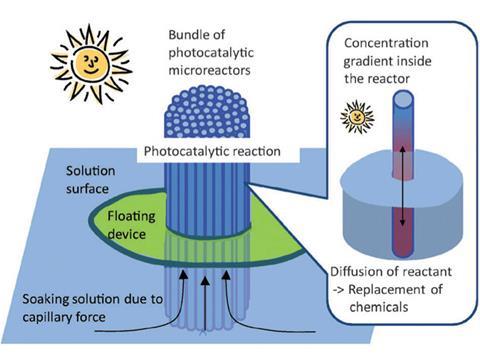 Researchers from Japan have developed a photocatalytic reactor for a water purifier that does not require batteries. Rather than using an external power source to pump water through the reactor, the system uses diffusion and capillary action to achieve an entirely non-electric reactor.

In addition to water purification itself, it is also important to ensure a constant and efficient transfer of contaminated water into the reactor and clean water out. This is normally achieved by an electric or fuel pump, but in areas where the power supply is often disrupted or is scarce, another approach is needed.

The team from Tokyo University, led by Kenji Katayama, has tackled this problem by making a microreactor made up of a series of capillary tubes coated with titania, in which purification and pumping happen simultaneously. The contaminated water is pulled along the length of the tube by capillary forces, undergoing photocatalytic purification from the titania as it does so. A concentration gradient develops along the length of the tube as the water is purified, which draws more contaminants in as the purified water diffuses out.

John Bell, an expert in optical materials at the Queensland University of Technology, Australia, described the idea as ‘neat’, although he did point out that there would need to be further research on the lifetime of the photocatalyst and purification rate.

Katayama, who was drawn to the topic of water purification after the 2011 tsunami in Japan, believes that one of the biggest appeals of the system is its versatility and lack of expensive equipment. ‘I was lucky – I used a capillary that is basically a thin glass tube and is very cheap,’ he says. He also points out that due to the system’s simplicity, it could be used in a wide range of situations. ‘Since we just put the capillaries together with an adhesive, we can change the size of the system easily,’ he adds.