An alternative approach to hydraulic fracturing or fracking of shale rock to release tightly-stored natural gas that may be safer than conventional techniques is being tested across North America. However, gas producers trialing the method, which uses propane instead of water to break up the rock, are not revealing results data. This is holding back the widespread introduction of the method in the booming shale gas sector which is transforming the US energy and petrochemicals feedstocks sectors.

Shale gas production could also transform the outlook in Europe, Asia and Latin America where there are large reserves. But fears about the possible hazards of fracking would have to be resolved first.

Gasfrac Energy Services, a small Canadian company in Calgary, Alberta, has developed a technology for using gelled propane-based liquefied petroleum gas (LPG) as a substitute for water to carry the chemicals and sand needed to fracture the shale rock. 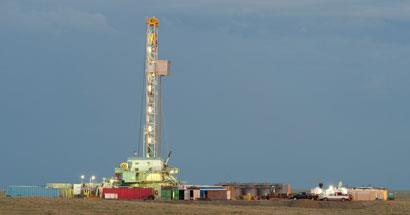 Huge amounts of water are used during fracking - as much as 8 million gallons in an average shale gas well. This chemical containing water then flows back to the surface with the potential to foul drinking water supplies and rivers.

Also, small earth tremors which have on occasion accompanied shale gas production in the US and recently in Blackpool, UK, during test drilling for shale gas have been blamed on the massive pressure exerted by the water in underground rock formations.

So far, tests of the LPG, made up of 90 per cent propane and a diester phosphoric acid gelling agent to give it sufficient viscosity to carry chemicals and sands, show that it is both safer and far more efficient than water. Instead of bringing the fracking chemicals to the surface it leaves them behind.

’This is a game changer for the industry,’ says Don LeBlanc, principal consultant at Eastex Petroleum Consultants in Halifax, Nova Scotia, who has been involved in shale gas trials with gelled propane in New Brunswick, Canada.

’The main advantage of the gelled propane is that once the gel is broken the propane flashes and mixes with the gas,’ he explains. ’Since the propane becomes part of the reservoir flow, the generated fracture is completely cleaned up, whereas in a water-based fracture stimulation, some of the water remains trapped in the fracture. In addition a water-based fracture has an efficiency of around 20 per cent, while propane has 100 per cent efficiency. ’

Nonetheless, despite being used around 1000 times in Canada and the US since first being tested three years ago, little data on the application of the technology has been made publicly available. In such a highly competitive industry, producers do not want to disclose its potential benefits.

One perceived drawback of fracking by propane-based LPG is that initially it can cost 20-40 per cent more than water fracking. ’In reality the costs are comparable when the life cost of the well is considered,’ says Mr LeBlanc. ’Fracturing with water also yields an ongoing cost for water handling and water disposal. ’