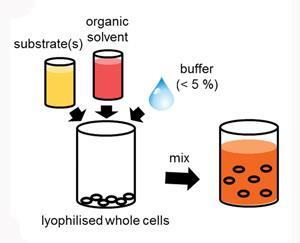 Enzymes are excellent catalysts for making chiral molecules. One-pot reactions under mild conditions are often possible with more than one catalyst, allowing multi-step syntheses in one go. But if enzymes are used as catalysts, they have to be extracted and purified, and expensive co-factors often need to be added. There are also solubility issues: enzymes are usually most active in buffers, but many of their substrates are hydrophobic, limiting the productivity of the biotransformation because the substrate won’t dissolve in aqueous buffers.

Dörte Rother and Andre Jakoblinnert, from the Jülich Research Centre in Germany, have come up with a solution. Using lyophilised recombinant Escherichia coli cells harbouring the desired enzymes, as opposed to isolated enzymes, they conducted a 2-step biocatalytic reaction. An organic solvent could be used so much higher substrate loads were possible. Before this work, only four biotransformations with recombinant whole cells in organic or micro-aqueous media had been reported, and all of these were single step reactions.

Nicholas Turner, a biocatalysis expert at the University of Manchester, UK, explains the benefits: ‘Rother and Jakoblinnert have combined a carboligase with an oxidoreductase to convert inexpensive starting materials into the optically pure product 1-phenylpropane-1,2-diol.’ Vicinal chiral diols such as this have many applications in pharmaceuticals – it’s an important building block for anti-angina drug diltiazem – and agrochemicals. The process’ high stereoselectivity (ee/de >99%) makes this a promising future synthetic strategy.

It is hoped that using whole cells will prove to be easier and greener. E-factors – a value describing the mass of waste per mass of product – for the reaction set a precedent for future experiments. Recycling the solvents used in the work-up will help to improve these numbers.

‘There is a growing interest in developing more environmentally acceptable processes in the chemical and biotechnological industries,’ says Andrés Alcántara, head of the Biotransformations group at Complutense University of Madrid in Spain. ‘The development of new processes to obtain chiral molecules is still an open challenge in organic synthesis … but biotransformations have acquired more interest for the production of chiral building blocks, as well as biologically active compounds, offering the prospect of more environmentally and economically attractive processes.’