As every schoolchild knows, water freezes at 0?C. Or perhaps not. It has been known for centuries that pure water, in the absence of any nucleating surface, can remain in a supercooled liquid state down to temperatures as low as
-40?C. Now, researchers in Israel have discovered that supercooled water itself will freeze at different temperatures depending on whether it is in contact with a positively or negatively charged surface. 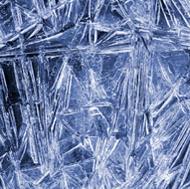 For more than 150 years it has been known that electrical fields can affect the freezing point of supercooled water.

However, it has been difficult to study the phenomenon in any detail because conducting surfaces promote nucleation of water in any event. Now, a team led by Igor Lubomirsky at the Weizmann Institute in Rehovot has devised an elegant experiment in which charge can be created on insulating surfaces to probe electrical effects on the freezing point of supercooled water.

The researchers used the pyroelectric material lithium tantalate (LiTaO3), which can develop a positive or negative electrical charge depending on temperature, as a surface upon which to study supercooled water droplets.

They found that on a surface with no electric field, the droplets froze at around
-12.5?C. On a positively charged surface, however, the freezing point was raised to -7?C, while if the surface was negatively charged the droplet did not freeze until the temperature reached -18?C.

There are a number of hypotheses for the effect of electric fields on the freezing of supercooled water, Lubomirsky says. ’The most commonly held belief is that an electric field affects orientation of the water molecules because the latter are polar. We do not have a direct proof of that.’ However, it was not previously known that positive and negative charges affected nucleation differently and this, Lubomirsky says, was an unexpected finding and the mechanism remains a mystery. ’This is exactly what we are trying to understand now.’

Paul Connolly, who researches the formation of ice crystals in clouds at the University of Manchester in the UK, says that the new work has uncovered what is ’certainly an interesting phenomenon’. Connolly adds that the results ’may prove useful and provide clues in understanding the mechanism by which ice formation could be enhanced in cumulus clouds.’