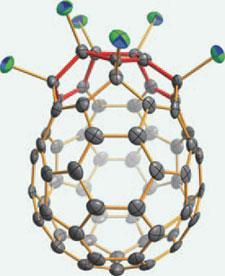 The strain caused by three sequentially-fused pentagons causes the fullerenes to bulge into unusual shapes, shown here in C66Cl6

Chinese researchers have made an exotic new family of fullerenes that contain three pentagons fused sequentially in their structure. Unlike classical fullerenes, such as the soccer ball-shaped buckminsterfullerene (C60) - the new compounds bulge out in unusual egg-shapes. It is hoped that these new structures might help reveal some of fullerenes’ mysteries.

Fullerenes are cages of carbon atoms, typically comprised of 12 pentagons and a varying number of hexagons. But in order to be stable, each pentagon must be surrounded by hexagons - known as the ’isolated pentagon rule’ (IPR).

’The IPR is a very strong rule of thumb for neutral bare fullerenes, where every adjacent pentagon costs about 100 kJ/mol in stability,’ explains Patrick Fowler, a fullerene expert at the University of Sheffield, UK. However, he notes that the rule can be overcome by adjusting the electron count in the structure, either by encapsulating other species, such as metal ions, or functionalising the carbon atoms on the surface.

Here, the secret was adding chlorine substituents to relieve some of the strain caused by adjacent pentagons. The researchers at Xiamen University, China, vapourised graphite in an arc-discharge reactor in the presence of carbon tetrachloride (CCl4), which produced 3g of fullerene-rich soot every hour. This was then painstakingly purified and separated by several stages of high performance liquid chromatography.

larger fullerenes, C66Cl6 and C66Cl10, which each contain a single set of triple sequentially-fused pentagons.

Although predicted experimentally, this is the first time that triple sequentially-fused pentagons have been seen in fullerenes, say the team.

’As seen here, by changing the pi network, the structures can support adjacent pentagons, and may even favour them,’ Fowler says. ’Even so, it is amazing that these molecules can be made in quantities sufficient for characterisation.’

The researchers hope that the discovery will shed new light on the mechanism by which fullerenes are made from graphite, which is currently unknown. One clue may lie in how the chlorine atoms are bonded to specific points on the surface of the balls, and not necessarily where they would be expected.

’This is a very elegant study that adds another exotic species to the "zoo" of fullerenes,’ says Andrei Khlobystov, who researches fullerene synthesis at the University of Nottingham, UK.  ’The challenge now is to synthesise and isolate a non-IPR fullerene in its pristine form - that is with no extra atoms attached to it. I am sure that it will have some remarkable chemical properties.’