Back away slowly, here comes 1,3,5-trinitro-2,4,6-trinitroaminobenzene – a compound that beats all other organic explosives with its enormous detonation power. 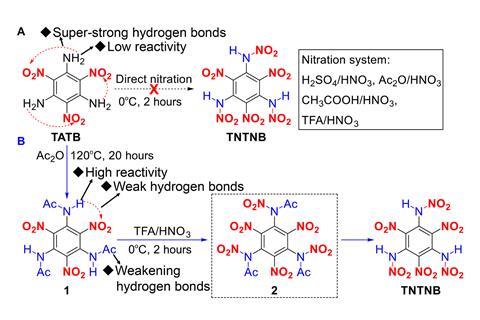 Synthetic strategies to produce TNTNB. Nitration of TATB to TNTNB using various nitration systems was a no-go. But synthesis of TNTNB was achieved by activating the amino groups by acylating them

Like other polynitrobenzene explosives, TNTNB neatly combines an oxidiser – the nitro groups – and fuel – the benzene ring – into a single molecular package. This means it can generate huge amounts of energy extremely quickly through self-redox reactions. Like hexanitrobenzene, TNTNB has six nitro groups but also three additional high-energy N–N bonds in its nitroamino groups.

TNTNB tops most other primary explosives, including TNT, in terms of its heat of detonation, which quantifies how much energy is released when it explodes. At 9510m/s it beats hexanitrohexaazaisowurtzitane’s detonation velocity. Its sensitivity to shock, friction and electrostatic discharge is comparable to that of lead azide and diazodinitrophenol.

Unlike hexanitrobenzene, TNTNB is stable in moist air, water, acids and bases. This is because its three nitroamino groups preserve the benzene ring’s aromaticity compared with all nitro groups.

TNTNB was made from trinitro-triaminobenzene, a molecule first created in 1888. It has since remained a synthetic dead end for explosives synthesis because the amino groups have such strong intermolecular hydrogen bonds that they can’t be directly substituted for nitro groups. The researchers solved this by activating the amino groups through acylation, which then allowed them to then attach the three additional nitro groups.