Functionalised fibre catches flu before you do

Scientists in China have developed a fibre that can trap the flu virus, which could be used in face masks and air filters to help to control the spread of the disease. 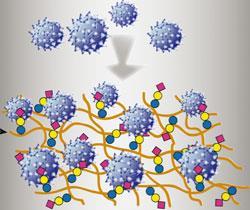 Chitosan covered in carbohydrate chains can ’filter out’ the flu virus

Every year, millions of people find themselves suffering the aches and pains of flu, and in the very worst cases - around 300,000 per year - the infection is fatal.   Recent flu pandemics have illustrated the severity and potency of the influenza virus and the continuing threat of future outbreaks demands rapid and effective controls.

When the flu virus infects a host the viral protein hemagglutinin attaches itself to carbohydrate chains on the host’s cells. ’This protein-carbohydrate interaction provides an interesting target for antiviral developments,’ says team leader Xuebing Li at the Chinese Academy of Sciences, Beijing. His team exploited this well known interaction by attaching the same carbohydrate chains to the natural polysaccharide chitosan, creating a fibre that can trap the flu virus. ’Multivalent presentation of the carbohydrate on a scaffold enhances the virus binding,’ says Li, adding ’chitosan’s unique biological properties and perfect fabricability make it an ideal scaffold’.

The team then prepared the functionalised chitosan as a filter to measure its ability to remove the avian flu virus H1N1 from water. The filter removed the majority of the virus and was significantly more effective than chitosan alone.

Ben Davis, a chemical biology researcher at the University of Oxford, UK, says this work is a ’neat combination of existing technologies,’ and a good example of translational research. ’If we are genuinely going to try to translate discoveries in chemical biology and materials into a functional output,’ says Davis, ’then this is exactly the type of [work] we need.’

While initial results are promising, Li admits there is still much to be done. ’We have only verified that the fibre can capture the flu virus in an aqueous medium,’ cautions Li. ’Further work is required before a real application such as a face mask or air cleaner filter can be attempted.’